Theatre Communications Group (TCG) along with the League of Chicago Theatres is pleased to announce that the fourth annual Free Night of Theater this year in 2008.  During the entire month of October 2008 in Chicago, people can see a production for free at a theater they’ve never previously attended. When possible, patrons are encouraged to attend a theater in the neighborhood or suburb in which they live. Reservations are limited to two tickets per person for the duration of the program.  This is an unprecedented campaign to attract new audiences to live theatre, will open in Chicago for the first-time in October 2008. Free Night of Theater was conceived in 2003 as a way to remove perceived barriers that have historically prevented audiences from attending theater. This year more than 110 cities and 700 theaters nationwide are participating.  Tickets must be reserved online at the Free Night of Theater website and not through each theater’s individual box office. Once tickets have been reserved through the website, patrons will be able to pick up their tickets at the individual theater’s box office on the night of the show. 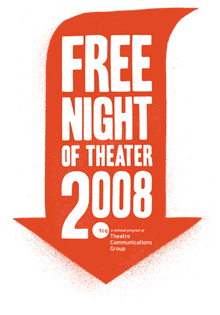 According to Brad Erickson, executive director of Theatre Bay Area and participant in every year of the program, “Since the campaign’s pilot year here, we have seen an extraordinary response from theatres, audiences and the whole community. The demand for live theatre—when it’s made accessible to all—is overwhelming. We’re bringing in new audiences—young people, people of color, people from all walks of life—and the research tells us they are going back for more. Free Night of Theater has thrown the doors of our theatres open wide.”

In response to the excitement generated by the program, Teresa Eyring, executive director of TCG, remarked, “The Free Night of Theater program has provided the theatre community a unique opportunity to open its doors to thousands of new theatergoers and introduce a new audience to the joys of live theatre. We are very excited that the program has proven to be so successful in bringing in non-traditional theatre audiences to theatres from coast to coast.”

The League of Chicago Theatres (LCT) is an alliance of theaters which leverages its collective strength to promote, support and advocate for Chicago’s theater industry locally, nationally and internationally. The League of Chicago Theatres Foundation (LCTF) is dedicated to enhancing the art of theater in the Chicago area through audience development and support services for theaters and theater professionals.