5 days ago
FREE 32nd Annual International Small Print Show & Holiday Sale in Chicago
4 weeks ago
FREE New Years Eve Transportation with CTA, PACE and METRA
4 weeks ago
FREE Burger at Shake Shack Through Jan 2 2022
1 month ago
What Stores Will Be Open Friday in Chicago Area on Christmas Eve
2 months ago
MUST DO: 2021 FREE Do-It-Yourself Messiah in Chicago – December 19
2 months ago
McDonald’s Offering 63 Cent Egg McMuffin For One Day Only
3 months ago
MegaList: Freebies and Discounts for Veterans Day Nov 11

If you are a Chicago resident or a visitor to Chicago, there is so much to do in the country’s third largest city.  make sure you plan your weekend or longer stay and take in many of the great Chicago attractions in Chicago.  here is our favorite 25 things to do in Chicago. 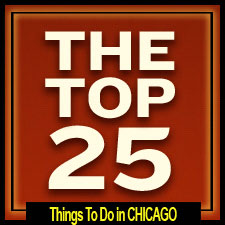 It also contains temporary exhibition space, shops and classrooms, a cafe and a restaurant, Terzo Piano, that overlooks Millennium Park from its terrace. In addition, there is a stunning cantilevered Nichols Bridgeway that connects a sculpture garden on the roof of the new wing with the adjacent Millennium Park to the north and a courtyard designed by Gustafson Guthrie Nichol., with collections dating from 3,000 B.C. through the present, including famous French Impressionist paintings and drawings; fine and decorative arts from America, Europe, Africa, Asia and Latin America; photography, textiles and architectural works.

2.    At The Field Museum, you can re-discover Sue, the largest and most complete T. Rex ever found!  Check out some great exhibits, including Sue Escapes , the Evolving Planet or DNA Discovery Center Exhibitions. The Field Museum was originally founded to house the biological and anthropological collections assembled for the World’s Columbian Exposition of 1893, which form the core of the Museum’s collections. The Museum’s exhibition, research and education programs are renown and include a world-class natural history library of more than 250,000 volumes.get a bug’s-eye view in Underground Adventure, descend into an Egyptian tomb, watch a glowing lava flow, be dazzled by sparkling gems, come nose-to-nose with the man-eating lions of Tsavo, and learn about the worlds cultures and environments.

3.     The Shedd Aquarium houses the world’s largest indoor aquarium and offers more than 22,000 aquatic animals from around the world. The Oceanarium reopened in 2009 after a major renovation and features an elaborate recreation of a Pacific Northwest marine environment with dolphins, harbor seals, sea otters, penguins and beluga whales. New exhibits in the Oceanarium include the kid-friendly, interactive Polar Play Zone, and the Grainger Beluga Encounter Habitat which brings spectators up close to whales. The Oceanarium’s new multi-species aquatic show ‘”Fantasea” opened in October 2009.  The world’s largest indoor aquarium celebrated its 75th anniversary in 2005 and continues to awe crowds with colorful permanent exhibits such as “Seahorses and Seadragons,” which leads the list of more than 650 featured species of marine life, and “Amazon Rising,” which brings to life one of the world’s most diverse environments, where anaconda, piranhas and arawanas make their home. Additional exhibits include the impressive “Wild Reef” display, one of the largest and most diverse shark exhibits in North America, featuring more than 25 sharks, 500 species of reef fish and the largest display of live coral in the Midwest; and “Grand Cayman Iguana,” featuring two of the critically endangered giant lizards, on public display since 2005 after living behind the scenes at Shedd. Learn about threats to the Great Lakes ecosystem at the “Invasive Species” exhibit, which includes Asian carp, zebra mussels and more.

4. Chicago Music Scene – The Chicago Symphony Orchestra is arguably the greatest symphony in the world. At Symphony Center, you’ll find the world-famous Chicago Symphony Orchestra, now led by new musical director Richard Muti. But Chicago is also home to the blues.  Just a short stroll away is Buddy Guy’s Legends nightclub, named for its legendary blues guitarist owner. The blues, jazz, reggae, modern rock and more are alive in Chicago, with dozens of clubs all over town. 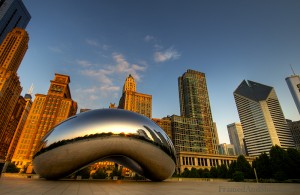 visiting Chicago, you must check out Cloud Gate, or what we locals call “the Bean”.  One of Chicago’s leading free attractions, “The Bean” or “Cloud Gate” is British artist Anish Kapoor’s first public outdoor work installed in the United States.  The 110-ton elliptical sculpture is forged of a seamless series of perfectly polished stainless steel plates, which reflect the city’s famous skyline and the clouds above.  Visitors and citizens alike are marveling at the beauty reflected off the Bean and the near perfection of the work and it remains one of the leading things to do in Chicago. A 12-foot-high arch provides a “gate” to the concave chamber beneath the sculpture, inviting visitors to touch its mirror-like surface and see their image reflected back from a variety of perspectives.

7.Hancock Observatory – The 94th-floor observatory, more than 1,000 feet above Chicago at the John Hancock Center, features an open-air Skywalk, the Midwest’s highest open-air experience; Sky Tours, which takes you on a personal audio tour of Chicago’s incredible sights and remarkable history; Soundscope 3-D “talking” telescopes that speak in four languages and create startling real sound effects; a Chicago history wall; and a theme park-style ticketing area that recreates the construction of the John Hancock Center.

8.The Chicago Botanical Garden is a 385-acre, living museum features 23 specialty gardens set on a series of islands and lakes. The Garden is always in bloom, featuring year-round exhibits, festivals, tours and special events. 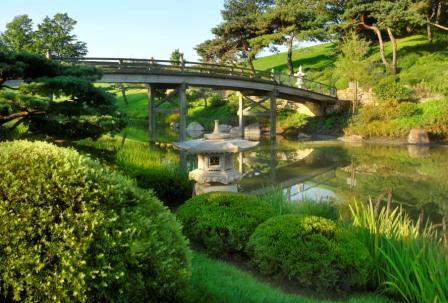 10. The Chicago Children’s Museum provides hands-on exhibits and new activities daily for your children to make every visit unforgettable for toddlers to ten year olds and adults, too! Try to stay dry in WaterWays, Dig deep in Dinousaur Expedition, or climb up to the crow’s nest on the Kovler Family Climbing Schooner.

11.  Since 1959, The Second City has established itself as a Chicago comedy  landmark and a national treasure. The theater that launched the careers of such comic greats as Bill Murray, Gilda Radner, John Belushi, Mike Myers and more offers nightly comedy shows, as well as a variety of other programs and services.

12 .With the best view of Chicago from one of the world’s tallest buildings, the The Sears Tower, ….er Willis Tower Skydeck offers free touch and tell computers featuring Chicago’s landmarks in six languages, as well as a chance to go out on the Glass Ledge over 1,300 feet off the ground!

13.  Millennium Park is located in the heart of downtown Chicago, and with its unprecedented combination of architecture, monumental sculpture and landscape design, the 24.5 acre Millennium Park has become the crowning achievement for Chicago in the tradition of its original founders.  It is bordered by Michigan Avenue to the west, Columbus Drive to the east, Randolph Street to the North and Monroe Street to the South.

14.Chicago Dining Scene – Chicago is a foodie town and while it boasts great steaks and deep-dish pizza, the city’s diverse dining offerings feature everything from ethnic dining to traditional family fare to the hottest new restaurants.

15.  The Magnificent Mile offers 460 stores in eight city blocks. Beyond the Chicago favorites like American Girl, Crate & Barrel, the Apple store and Niketown, there are great restaurants, unique shops and several museums and galleries to round out your day on the mile. 900 North Michigan Shops features Bloomingdale’s Fashion department store, with six levels of upscale retailers, including several restaurants, full service salon and spa and a state-of-the-art fitness facility.

17. Navy Pier has been a Chicago landmark since it opened nearly 100 years ago in 1916.It now showcases a unique collection of restaurants, shops and plenty of entertainment, including the Chicago Shakespeare Theater, the Chicago Children’s Museum, an IMAX theater, Crystal Gardens (an indoor botanical park),  and Smith Museum of Stained Glass Windows.

18. The Chicago Bears play at the newly renovated Soldier Field located on the shore of Lake Michigan just south of downtown.  The Bears will be starting their 2010 season in September.

19.The Chicago Bulls and the Stanley Cup Champion Chicago Blackhawks play at the United Center which is a tourist stop for those wanting to see a life-sized bronze statue of former Bulls’ star Michael Jordan.

20.  The Chicago Fire, a member of the 10-team soccer league, plays at the excellent Bridgeview Toyota Park.

21.  Chicago is truly a baseball town with the Chicago Cubs and Chicago White Sox playing in town.

23. Chicago Theater Scene – Chicago is home to a vital, vast and varied community of theatrical companies, as well as several large independent theaters, where you’ll find everything from traveling Broadway mega-hits to small theaters like Provision Theater, to experimental theater, to Chicago’s famous improvisational groups that display the wit and humor of the Second City.

25.  Westfield North Bridge is an elegant specialty center anchored by the Midwest flagship Nordstrom. Popular retail stores and innovative restaurants are enclosed in a four-level concourse at 520 North Michigan Avenue.