Are you ready to see Chicago’s Theater to the Stars? It is not free, but the $12 Chicago Theatre tour encompasses historical and architectural highlights of this grand old dame of theaters, including the grand lobby areas, majestic auditorium and backstage space (when possible).  During the tour, you will hear about the visionaries who opened The Chicago Theatre, whose influence on popular entertainment in Chicago is still recognized today. Tours also include the photo exhibit in The Chicago Theatre’s lower lobby, “Chicago: Three Centuries of Theatres.” 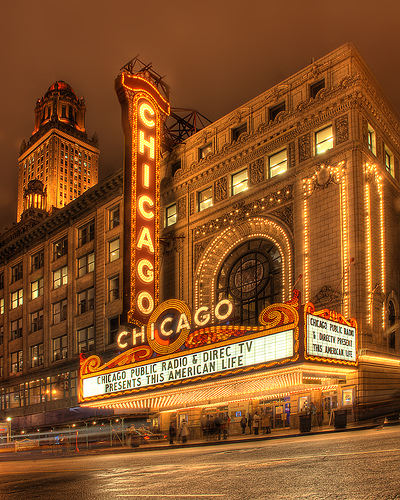 The running time for all weekday tours is approximately 1 hour and video cameras are not allowed..

Reservations do not need to be made in advance unless your party contains more than 10 people and the cost is $12 per person.

Coats, Bags & Strollers must remain with guests, there are no check or holding areas.

Tickets may be purchased at the Chicago Theatre Box Office or by visiting www.ticketmaster.com. Special arrangements and rates can be made for groups of 10 or more by calling 312.462.6300 and choosing option 5.

General Box Office hours:
Tuesday and Thursday 11:30am – 6pm
Monday, Wednesday and Friday 12pm to 6pm
Saturday tour tickets may be purchased at the State Street doors 10 minutes before tour.

A souvenir VIP badge is included with the price of admission.