A free concert will feature the Chicago debut of Chinese music virtuosi with Fulcrum Point ensemble on Tuesday, May 19.  As part of the citywide Hong Kong Comes to Chicago 2009 festival, Fulcrum Point New Music Project will present Hong Kong at the Fulcrum Point, a concert collaboration featuring the Chicago debut of the vibrant young Chinese Music Virtuosi ensemble, at the Thorne Auditorium of Northwestern University, 375 East Chicago Avenue, Tuesday, May 19, at 7:30 p.m. This free one-night-only performance will feature Chinese music by contemporary Hong Kong and U.S. composers, including three premieres (for music and dance) commissioned specifically for this concert event.

While the Hong Kong at the Fulcrum Point concert is free and open to the public, e-tickets must be reserved in advance by emailing RSVP5-19@fulcrumpoint.org. Limit four e-tickets per person, and requests will be honored on a first-come, first-served basis. 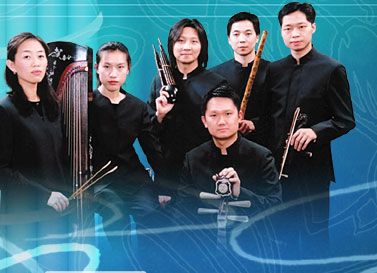 “We are thrilled to be welcoming this brilliant young ensemble to Chicago. This program is the ultimate Fulcrum Point experience of inspiring new music in the powerful context of exquisite imagery, dynamic dance, and the spiritual richness of traditional ritual,” said Stephen Burns, Fulcrum Point New Music Project Founder and Artistic Director.

“Hong Kong Comes to Chicago 2009 will lead the Chicago community to experience the diverse culture of Hong Kong, which is a legacy of its colorful past and the vitality of its present,” said Monica Chen, director of Hong Kong Economic Trade Office of New York. “This musical performance is one of many activities of the festival that will offer Chicagoans an opportunity to learn about the evolving ‘modern heritage’ of our continuously vibrant and transformative city.”

Hong Kong at the Fulcrum Point will showcase three World Premieres, including two pieces of music by Hong Kong-based composers specially commissioned for this performance: Semblance of Invisible by Ng King-pan to accompany a performance by Chicago Tai Chi master, Dong Xiao-fei, and a bliss: day in, day out by Aenon Jia-en loo for both ensembles, for the grand finale. In addition, the program will feature new choreography by Melissa Thodos to the score, Yi Zhi Shan, a solo for the pipa by Law Wing-fai, to be performed by Thodos Dance Chicago soloist Mollie Mock.

Also on the concert bill will be a mix of popular and traditional works in the contemporary Chinese music canon, such as Thunder and Drought, adapted from Triratna Buddha and currently heard in a popular commercial advertisement; Autumn Moon over a Placid Lake, by the famous Cantonese music master Lu Wen-cheng, which has appeared in several operas in Hong Kong; Shiny Moon, Rainy Sky, a familiar folk song based on two popular nursery rhymes, in a new arrangement by Chan Hing-yan; Chanted Rituals by Asian-American composer Vivian Fung, featuring Fulcrum Point core percussionists Jeff Handley and Tina Laughlin, and Fulcrum Point Artistic Director Stephen Burns on trumpet; and It Is What It Is by Tang Lok-yin, a three-movement work blending Chinese ritualistic drumming with blues-inspired invocations and dance rhythms.

Since being formed in 1997 by Loo Sze-wang and Chu Siu-wai, the Chinese Music Virtuosi has performed at the International Society of Contemporary Music, the Bartok Festival in Hungary, the Garden Festival in Warsaw, the Melbourne Festival, the Singapore Arts Festival, the Buenos Aires International Music Festival, New Vision Festival of Hong Kong, Hong Kong Arts Festival, and the Chinese Composers’ Festival, among others. The group has commissioned over a dozen new works, which include scores for both Chinese and Western instruments.

May 1 marks the launch of Hong Kong Comes to Chicago 2009, a festival throughout Chicago in conjunction with the city’s month-long celebration of Asian Pacific American Heritage Month. Hong Kong Comes to Chicago 2009 showcases Hong Kong’s creativity, entrepreneurship, and cultural and economic vitality. The festival offers an opportunity to learn about the evolving “modern heritage” of this continuously vibrant and transformative city through art, films, exhibitions, concerts, and educational symposiums. The festival is hosted by the Hong Kong Economic and Trade Office, New York and supported in part by the Hong Kong Tourism Board and the Hong Kong Trade Development Council. The month-long celebrations are also in partnership with the Chicago Commission on Human Relations Advisory Council on Asian Affairs, the Chicago Department of Cultural Affairs, Fulcrum Point New Music Project, the Gene Siskel Film Center and Northwestern University Medill School of Journalism. For more information about the festival, please visit: www.hongkongcomestochicago.com.

Since its formation by trumpet virtuoso and conductor Stephen Burns in 1998 under the auspices of Performing Arts Chicago, the mission of Fulcrum Point New Music Project has been to champion new classical music and highlight contemporary composers who are inspired and influenced by popular culture, including literature, film, dance, folk, rock, jazz, blues, Latin and world music. Through multi-disciplinary concert performances and educational programs, the Fulcrum Point ensemble seeks to encourage audiences to make cross-cultural connections between new music, art, technology and literature, gaining greater insight into today’s diverse world. Burns, himself, has been acclaimed on four continents for his widely varied performances encompassing recitals, orchestral appearances, chamber ensemble engagements, and innovative multi-media presentations involving video, dance theatre, and sculpture.

Overview: Community event in honor of Asian Heritage Week. Hong Kong will be featuring displays representing different aspects of the city and will offer games and giveaways to those attending. Musicians from Hong Kong’s “Chinese Music Virtuosi” ensemble will perform on traditional Chinese instruments at noon on May 19.