Start your summer off right by seeing acclaimed Chicago band Poi Dog Pondering play a free concert in South Barrington at 8 p.m. Saturday, May 23.  The show is part of the Arboretum of South Barrington’s Memorial Weekend Block Party, a two-day event that will include a sidewalk/tent sale and plenty of family activities.

The eclectic worldbeat/folk-rock outfit Poi Dog Pondering were formed in Waikiki by vocalist/guitarist Frank Orrall, violinist/vocalist Susan Voelz, and multi-instrumentalist Dave “Max” Crawford, the only constants in the group’s history; sometimes swelling to upwards of ten members, the band has seen numerous personnel shifts. Named in part for a Hawaiian expression meaning “mutt,” Poi Dog Pondering picked up a following through extensive touring. 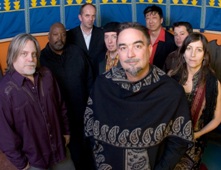 They released two EPs, 1988’s Poi Dog Pondering and 1989’s Circle Around the Sun, which attracted the attention of Columbia Records with their varied instrumentation, easygoing humor, and offbeat fusions of world musics and folk-rock. Columbia combined the two EPs for the group’s 1989 self-titled major-label debut, which along with its slightly slicker follow-up, 1989’s Wishing Like a Mountain and Thinking Like the Sea, earned Poi Dog Pondering critical acclaim and a devoted cult following.

The Arboretum, an open-air shopping center at the corner of Routes 59 and 72, has other special events planned for the summer. For information, call (847) 426-6200, or visit shopthearboretumsb.com.