Enjoy free comedy on Sunday nights at the Playground Theater as they present the Sunday Night Free for All.  You get three comedy acts for free as a trio of local comedy troupes performs improv for the recession stressed. The group Koleno proves competent, but it’s middle troupe Panty Filers that blew us away with its high-energy, boundary-pushing, fourth-wall-breaking improv. Hair Club for Men opens.

Koleno is a four person improv team in Chicago that has been together since 2004. A Koleno show starts with a member taking the suggestion of a location and from there it quickly turns into fast paced comedy that often resembles a fist-fight. Koleno is Steve Fleming, Dan Luebbe, Mike Matuzewicz and Peter Sebastian and is coached by Kevin Fleming. 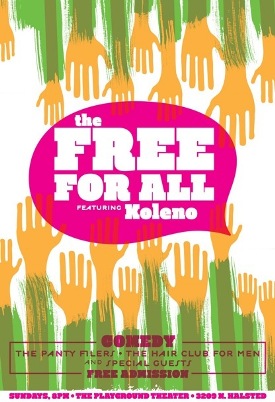