Are you a big early rock’n’roll fan?   The cast of the smash hit Million Dollar Quartet will be performing a free concert at the Jay Pritzker Pavilion in Millennium Park on Tuesday, June 2, 2009, at 6:30 p.m. Chicago’s beloved musical was inspired by the famed 1956 recording session that brought together legendary rock ‘n’ roll icons Johnny Cash, Jerry Lee Lewis, Carl Perkins and Elvis Presley.

The hour-long performance in Millenium Park will feature classic, crowd-pleasing rock ‘n’ roll, gospel, R&B and country hits from the musical, including “Blue Suede Shoes,” “Great Balls of Fire” and “Whole Lotta Shakin’ Goin’ On,” and “Ghost Riders,” among others. Featuring a treasure trove of the greatest songs ever recorded, the show “Million Dollar Quartet” captures the infectious spirit, freewheeling excitement and thrilling sounds of a singular moment when four of the music industry’s most extraordinary talents, all in their creative prime, came together for one of the most memorable nights in music history.

The background on the historical meeting that took place on 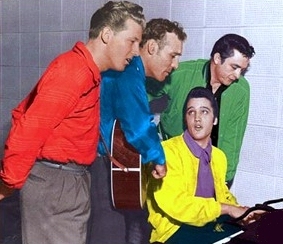 December 4, 1956, is that an auspicious twist of fate brought Johnny Cash, Jerry Lee Lewis, Carl Perkins and Elvis Presley together. The place was Sun Records’ storefront studio in Memphis.  The four legends-to-be united at Sam Phillips behest for the only time in their careers for an impromptu recording that has come to be known as one of the greatest rock jam sessions of all time.

Millennium Park, managed and programmed by the Chicago Department of Cultural Affairs, is an award-winning center for art, music, architecture and landscape design. The result of a unique partnership between the City of Chicago and the philanthropic community, the 24.5-acre park features the work of world-renowned architects, planners, artists and designers. Among Millennium Park’s prominent features are the Frank Gehry-designed Jay Pritzker Pavilion, the most sophisticated outdoor concert venue of its kind in the United States; the interactive Crown Fountain by Jaume Plensa; the contemporary Lurie garden designed by the team of Gustafson Guthrie Nichol, Piet Oudolf and Robert Israel; and Anish Kapoor’s hugely popular Cloud Gate sculpture. Since its opening in July 2004, Millennium Park has welcomed more than 16 million of people, making it one of the most popular destinations in Chicago.

For more information about Millennium Park, call 312.742.1168 or visit www.millenniumpark.org.