Are you ready for some blues?  The Chicago Blues Festival takes over Grant Park this weekend — June 12-14 — and continues to be the largest free blues festival in the world.  The free blues festival covers three days on six stages, and last year more than 600,000 fans turned out to sing the blues. The Chicago Blues Festival provides free admission for the general public to come discover these musicians, singers and talented artists perform their work.

The Chicago Blues Festival attracts big name mainstream performers who like to collaborate with local Blues singers and musicians including Bonnie Raitt, Ray Charles, B.B. King, Bo Diddley, Buddy Guy and Koko Taylor.  From the looks of the schedule it should be a great weekend for music. (if the weather cooperates).

To date, blues is considered one of the most popular kinds of music and it has influenced many famous musicians. Popular music like country, jazz, rock and roll, R&B and hip-hop are rooted in the Blues. Always rooted in the struggle, the music often is as uplifting as it is entertaining. For many artists, playing the Chicago Blues Festival is considered a right of passage and this year the Blues Fest welcomes two dozen new performers to the event. 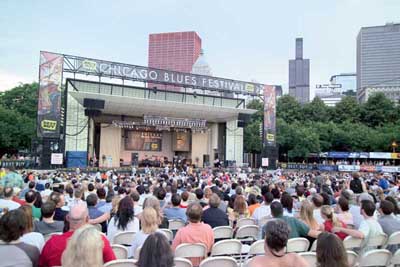 Each day of the festival tells a different story about life, loss, independence and freedom and this year, the life and work of Robert Nighthawk is celebrated on the centennial of his birth. In tribute to Nighthawk, all fans can be a part of “Art of Slide Guitar” session featuring Jeremy Spencer, Lil Ed, John Primer & Elmore James Jr.

On Friday June 12th, there will be a special 70th Birthday Party for Eddie C. Campbell! He is considered one of the most distinctive, original bluesman ever and is one of the last of the originators of the West Side sound of Chicago blues still performing. Eddie C. is a master at deep funk blues grooves, mesmerizing audiences with his devastatingly wild, vibrato guitar and powerful, resonating vocals, along with a unique, personal songwriting style. The celebration begins at 8:20pm, Friday on the Petrillo stage in Grant Park.

Saturday and Sunday belong to the women of blues! Bettye LaVette performs at 8:20pm, Saturday at the Petrillo stage. LaVette is one of the greatest soul singers in American music history and possesses an incredibly expressive voice that exudes a formidable level of strength and intensity as well as vulnerability. Closing out Sunday night (8:20pm on Petrillo) is Sharon Jones and The Dap Kings. Jones, once disregarded by shallow record producers in the 1970s, is now considered a legend for making new music sound “old School.” A Georgia native, Jones has the moves, the roots and the soul. And The Dap Kings, sometimes a back-up band to Amy Winehouse, have been sampled by everyone from Kanye West to Jurassic 5, together Sharon and The Dap Kings promise to funkify the Blues Festival.

Food and Drinks tickets are sold in quantities of 12 for $8. (most food/drinks are a bit pricey, but the festival being free makes up for it)