If you haven’t seen it, ComedySportz is the longest running stage show in Chicago and is team improv comedy played as a sport!   Come out on a Wednesday night starting tonight June 10, for their Free Night of Comedy, at 8 pm. 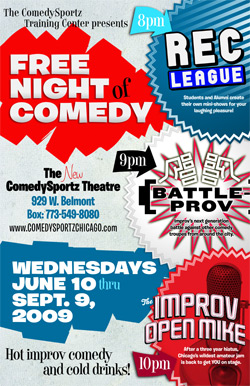 They are kicking off their second season of FREE NIGHT OF COMEDY, with free laughs and cheap drinks. At 8pm, you can watch REC League, with red and blue teams each performing their own unique short-form show. Then, at 9pm, Battle-prov takes the field to do comedy battle against another local improv team. Vote with your drinks! And stick around, because at 10p, the Improv Open Mike starts, where you can get on stage and play or watch other people try!

Click a link on the right for more info on a particular show!

REC League — features 2 teams each performing their own unique short-form show. So, who plays in REC League? These players come in all shapes and sizes. Some are graduates of the ComedySportz Training Center, some are newer improvisers from around the city, and some are recent transplants from other improv-friendly cities who have come to Chicago to make it big! Each REC League team is coached by a ComedySportz ensemble member. This season’s coaches are: Rich Baker, Erin Pallesen, Nick Hausman, and Natalie Sullivan.

Battle-Prov — A ComedySportz farm team battles against improv troupes from colleges all around the city. Your votes determine the winner!  Battle-Prov is directed by Sam Super 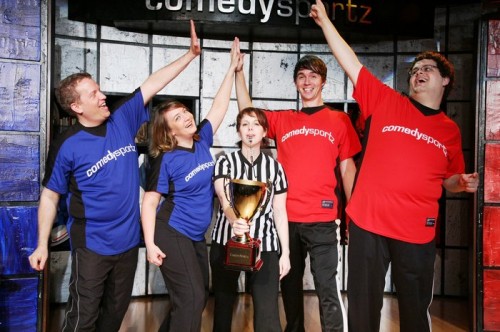