Want a wonderful lunch break downtown? Take your lunch and head to the Jay Pritzker Pavilion in Chicago’s Millennium Park where you will find free concerts and special programs on the stage at noon all summer long. From June 1 through September 30, Millennium Park will offer free concerts in jazz, world music, indie-rock, hip hop and electronica, along with family programs and open rehearsals of the acclaimed Grant Park Music Festival. 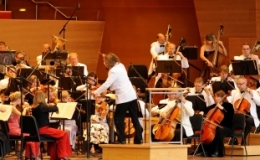 What is being performed:
Kernis: Too Hot Toccata
Bernstein: On the Waterfront: Symphonic Suite
Shostakovich: Song of the Forests, op. 81