On June 11, Kanye West hosted a free concert for Chicago Public Schools in association with The Kanye West Foundation and S.H.O.W.  All the proceeds went to the funding of Loop Dreams, a program that aims to keep kids engaged in school by supplying them with access to recording equipment, software, and instruments.

Rapper Kanye West rewarded Chicago Public Schools students who have improved their grades this year by performing for them in a free concert this afternoon at the Chicago Theatre. The show–dubbed the Second Stay in School Benefit Concert– is an extension of the Kanye West Foundation, founded by the late Dr. Donda West, West’s mother in 2005. It is the first major event for the foundation since she died in 2007 and is the first concert Kanye West has performed in Chicago in over a year, according to a news release.

Kanye made the day for several CPS students with perfect attendance, who were table to come in early and listen to Kanye go through his soundcheck earlier in the day.  Kanye made a speech during “Put On” in which he speaks about his love for Chicago, and more importantly Chicago Public School Students.  He explains Loop Dreams, and how he feels adding Protools to schools will help kids in and out of the classroom. 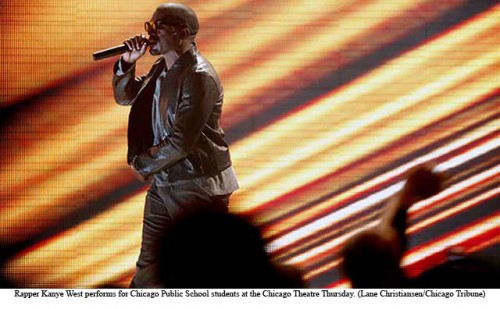 David Abrams, a sophomore at Highland Park High School, conceived the show when he heard an NPR news report about the mother of a failing CPS student who offered her son tickets to a Lil Wayne concert as an incentive to stay in school.

Abrams formed S.H.O.W. (Students Helping Our World), a group of Highland Park teens, and partnered with CPS, the City, former Chicago Bears quarterback Kyle Orton and the Kanye West Foundation to bring his idea to fruition in about four months.

“Especially from me coming from a medium that people thought could never turn around and help the community, that people always thought only hurt the community. And like [Notorious] B.I.G. said, whoever thought hip-hop would take it this far?”
About 3,000 CPS students from six high schools – John M. Harlan Community Academy, Manley Career Academy, Stephen T. Mather, Paul Robeson, Nicholas Senn, and Fredrich W. von Steuben Metropolitan – filled three tiers of the Chicago Theatre Thursday afternoon.

In order to be awarded tickets, students had to improve their attendance, arrive to school and classes promptly, decrease school and class tardies, improve grades in all classes with no failing grades and reduce the number of misconducts they may have received.

The measures were determined by a committee composed of S.H.O.W. organizers and academic school staff from each school, said Ron Huberman, CEO of Chicago Public Schools. A provision was also made for the principal of each school to award tickets based on their knowledge of students and the challenges they had overcome.

“You’re trying to figure out where you can cut the line on the criteria to make sure that those kids that achieve that are able to come,” Huberman said. “This is about having the desire to achieve and working hard and that’s really what we’re looking for.”

The Kanye West Foundation was established to help combat the severe drop-out rate in schools across the country by partnering with community organizations and providing youth with access to music production programs. Though West dropped out of college, he said staying in high school is “a necessity.”

“It’s always this looming thing that my first album was called ‘The College Drop-out’, which me and my mother always argued about,” West said. “But it wasn’t called ‘The High School Drop-out.’ I feel like high school is a necessity. Anything that you have to pay for is your choice.”