Ready to square dance?  Tangleweed will be performing a free concert July 10 at the Chase Pavilion for Great Performers of Illinois Festival.  Tangleweed is a band of five forward-looking musical reactionaries from Chicago, Illinois.  While the band’s instrumentation is standard bluegrass, their music is anything but. With a repertoire both broad and deep, one listener described them as sounding like “a band playing on a pirate ship off the coast of New Orleans in the 1920s”.

Tangleweed (website) has been around since 2004, as the trio of Paul Wargaski on bass, and Billy Oh on fiddle came together to form the core. They added mandolinist Kenneth Rainey, Ryan Fisher on banjo, whom Fisher had met a year earlier at a bluegrass jam, where they were both admonished for “not being bluegrassy enough.”  Rainey in turn brought in his Logan Square neighbor Scott Judd on guitar to complete the quintet. 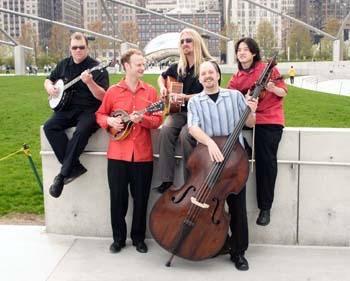 Their three CDs have garned critical praise and worldwide airplay, earning the band invitations to appear at major festivals and high-profile venues around the country.  Their brand-new record, Most Folk Heroes Started Out As Criminals, is out now. Their previous CDs, Where You Been So Long? and Just a Spoonful, have received glowing reviews and airplay in 22 countries.

They play acoustic Americana will be leading the square dancing – no experience necessary!