Clarke House Free Tours are at 12:00 noon and 2:00 pm on Wednesday.     Built in 1836 for Henry B. Clarke, the Clarke House Museum is Chicago’s oldest house. The Clarke House is free on Wednesdays.  The house shows what life was like for a middle-class family in Chicago during the city’s formative years before the Civil War.

Its fascinating history began at a time when family members could see the campfires of Native Americans in the distance. Over the years, the house survived fires, belonged to a church, and was moved twice – during the second move, the house was stuck in the air for two weeks.  The house is now located in the Chicago Women’s Park in the Prairie Avenue Historic District, and operated as a museum by the Chicago Department of Cultural Affairs.

Henry Hobson Richardson’s Glessner House was completed in 1887, a year after the architect’s untimely death. The Glessner House Museum is free on Wednesdays. A radical departure from traditional Victorian architecture, the structure served as an inspiration to the young Frank Lloyd Wright and helped reform domestic architecture. 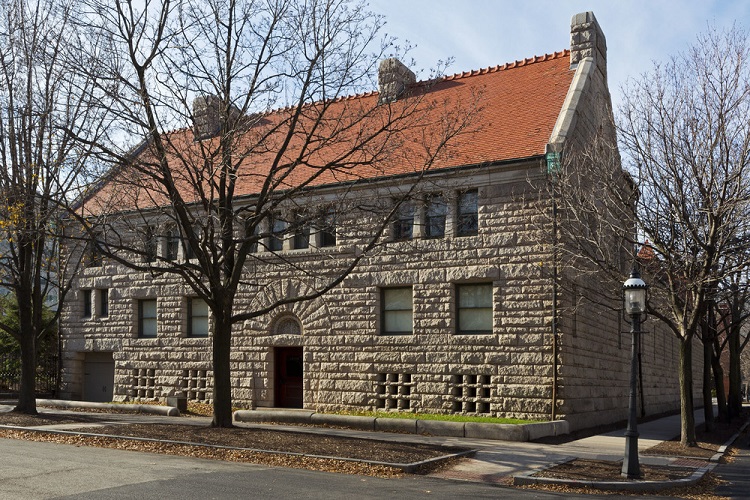 In 1885, John and Frances Glessner hired Boston architect Henry Hobson Richardson. Over the next year, he adapted

the couple’s specifications for gracious living into the stately home that helped redefine American domestic architecture. A radical departure from traditional residential design, Glessner House created a furor among the denizens of its exclusive Prairie Avenue neighborhood, causing George Pullman to proclaim, “I do not know what I have ever done to have that thing staring me in the face every time I go out of my door.”

Nestled inside the fortress-like, rusticated granite exterior is an oak-paneled English Arts and Crafts interior and a charming central courtyard. Visitors are embraced by the home’s warmth and enchanted by the eminently livable spaces it offers.

The only surviving Richardson building in the Midwest, Glessner House was saved from the wrecker’s ball in the late 1960s and designated a National Historic Landmark in 1976. The restoration and preservation of Glessner House helped set the standard for architectural preservation nationwide.

Charnley House Free Tours are at noon on Wednesdays.      The Charnley House, which has long been recognized internationally as a pivotal work of modern architecture, stands as evidence of the extraordinary power of Sullivan and Wright’s creativity in collaboration. The Charnley House Museum is free on Wednesdays. Louis Sullivan and Frank Lloyd Wright are major figures in American architecture.  Sullivan, Wright’s architectural mentor, hired the younger man in 1887 as a draftsman to assist with producing construction drawings for the Auditorium Building (1887-1889) in Chicago. As a junior draftsman, Wright also assisted with residential commissions such as the James Charnley House (1891-1892).

In Charnley House, as well as his other works, Sullivan rejected the historical details common to Victorian architecture

in favor of abstract forms that later became the hallmarks of modern architecture.  It is a sign of Sullivan’s admiration for Wright, and a testament to their friendship and working relationship, that the senior architect allowed his draftsman to become involved in the design process at all.  The exterior of Charnley House is a virtually unadorned brick and limestone facade that commands its corner location.  The dramatic interior of the house is dominated by an atrium that soars from the first floor hall to a skylight two floors above.  The house is symmetrical in plan, with one room located on either side of the central atrium on each floor.  The ornament found throughout the interior and exterior of the buildings is evidence of both Sullivan’s love of sinuous plant forms intertwined with underlying geometric forms, and Wright’s variations of these themes.