If you are visiting Chicago and looking for free things to do in Chicago, you must check out Cloud Gate, or what we locals call “the Bean”.  One of Chicago’s leading free attractions, “The Bean” or “Cloud Gate” is British artist Anish Kapoor’s first public outdoor work installed in the United States. The 110-ton elliptical sculpture is forged of a seamless series of perfectly polished stainless steel plates, which reflect the city’s famous skyline and the clouds above.  Visitors and citizens alike are marvelling at the beauty reflected off the Bean and the near perfection of the work and it remains one of the leading things to do in Chicago.

A 12-foot-high arch provides a “gate” to the concave chamber beneath the sculpture, inviting visitors to touch its mirror-like

surface and see their image reflected back from a variety of perspectives. Inspired by liquid mercury, the sculpture is among the largest of its kind in the world, measuring 66-feet long by 33-feet high. Cloud Gate sits upon the AT&T Plaza, which was made possible by a gift from AT&T.

What Did the Artist Say? What I wanted to do in Millennium Park is make something that would engage the Chicago skyline…so that one will see the clouds kind of floating in, with those very tall buildings reflected in the work. And then, since it is in the form of a gate, the participant, the viewer, will be able to enter into this very deep chamber that does, in a way, the same thing to one’s reflection as the exterior of the piece is doing to the reflection of the city around.
-Anish Kapoor

Where is it? The Bean is located in Chicago’s new  Millennium Park on the north east side of the park. This is on the Chicago lakefront north of Grant Park.  Click here to see Cloud Gate’s actual location in a diagram of Millennium Park.

How much did it cost? Originally estimated to cost $9 million, but project complications and delays (and Chicago politics) led to a final cost of $23 million. 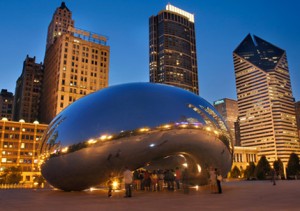 What is it made of? Perfectly polished stainless steel plates over a fortified steel frame.  Under these plates, it is actually hollow on the inside.  It was built and finished in place, on site because it was too heavy, bulky and dangerous to transport as one completed piece into Downtown Chicago.  The sculpture and AT&T Plaza are located on top of Park Grill, between the Chase Promenade and McCormick Tribune Plaza & Ice Rink. Constructed between 2004 and 2006, the sculpture is nicknamed The Bean because of its legume-like shape. Made up of 168 stainless steel plates welded together, its highly polished exterior has no visible seams.  Also, after it was built, it had to be polished and have its seams removed, giving the appearance of being one large shiny object, instead of being the sum of many shiny stainless steel plates.

What Does the Underside Look Like? On the underside of the sculpture is the omphalos, an indentation whose mirrored surface 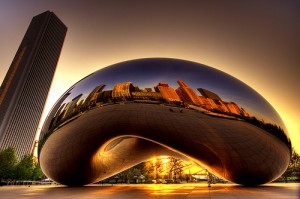 provides multiple reflections of any subject situated beneath it.[9] The apex of the omphalos is 27 feet (8.2 m) above the ground. The concave underside allows visitors to walk underneath to see the omphalos, and through its arch to the other side so that they view the entire structure.[10] During the grand opening week in July 2004, press reports described the omphalos as the “spoon-like underbelly”.[11][12] The stainless steel sculpture was originally envisioned as the centerpiece of the Lurie Garden at the southeast corner of the park. However, Park officials believed the piece was too large for the Lurie Garden and decided to locate it at AT&T Plaza, despite Kapoor’s objections.[13] Skyscrapers to the north along East Randolph Street, including The Heritage, the Smurfit-Stone Building, Two Prudential Plaza, One Prudential Plaza, and Aon Center are visible, reflected on both the east and west sides of the sculpture.

How Do they Clean the Bean? The lower 6 feet (1.8 m) of Cloud Gate is wiped down twice a day by hand, while the entire sculpture is cleaned twice a year with 40 gallons of liquid detergent. The daily cleanings use a Windex-like solution, while the semi-annual cleanings use Tide. In addition to the scheduled cleanings, the work endures periodic vandalism, including a notable February 2009 incident during which two names were etched in letters about 1 inch (25 mm) tall on the northeast side of the curved sculpture. The graffiti was removed by the same firm that did the original polishing.

Does it have any other names? “The Bean,” “The Chicago Bean,” “That Big Shiny Thing in Millennium Park”