Chicago’s past echoes worldwide as many visitors seek to learn more about its historical ties to Al Capone and Prohibition-era gangsters.  In the 1920s Chicago was a crime-ridden city,  fuelled by lawlessness, payoffs, alcohol, parties and the strains of wild jazz music. In January 1920, the Volstead Act ushered in the prohibition era, prohibiting the consumption of alcohol everywhere. Instead of inspiring an era of civic obedience, Prohibition increased crime as Chicago gangs fought over the “turf-rights” to bootleg moonshine and beer. The biggest and most notorious gangster of them all was Al Capone.  Nowadays, anything gangster and Al Capone is still very popular with tourists. While not free, these are very entertaining tours. Here’s a list of various gangster tours and historical places.

Take a gangster tour of Chicago 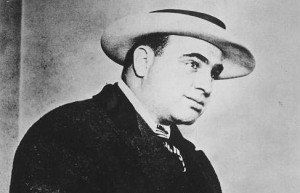 If you want to learn more about Chicago’s notorious past, then hitch a ride on the wild and rollicking  Untouchable Gangster Tour. The tours, which run every day and take two hours, are led by guides wearing gangster suits and talking the lingo. For $28 you’ll be ushered on board an old school bus that’s been painted black to make it look like an old gangster car. The guides are funny but also extremely knowledgeable — while nattily dressed in a pinstriped suit, suspenders, and fedora, guides share fascinating anecdotes about Chicago’s windiest politicians, rollicking red-light districts, and notorious mobsters as the bus cruises in search of old hoodlum haunts, brothels, gambling dens, and sites of infamous gangland shootouts.

Guides lead a two-hour, fact-filled tour of the city, driving past well-known landmarks such as Holy Name Cathedral, which still has a bullet hole in the limestone façade from the assassination of Hymie Weiss; the former Lexington Hotel (otherwise known as “Capone’s Castle”), which Al Capone used as his headquarters; and through Levy District (formerly known as The Devil’s Mile), where vice and corruption once led to a crime rate higher than the rest of the country combined. 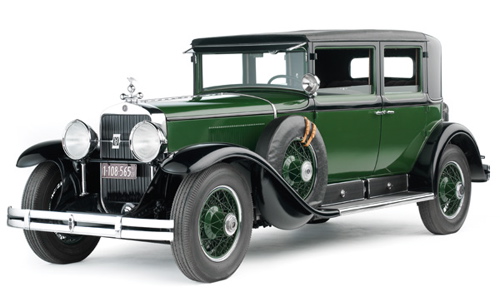 The tour also moves through Chinatown, Little Sicily, and the neighborhood of Pilsen, home to a building that once housed the famous Schoenhofen Brewery. The building itself is full of lore: Capone used it to brew legal “near beer” then spiked it with rot-gun whiskey; Frank Lloyd Wright once called the structure the perfect example of prairie architecture in America; and it was used during the filming of the orphanage scenes in The Blues Brothers movie.

There are also a number of other places you can visit by yourslef to learn more about the gangster era in Chicago.

2122 N. Clark Street is the site of Capone’s most notorious killing. On February 14th 1929, four of Capone’s men, two dressed as police, went into a garage which was the liquor headquarters of rival “Bugs” Moran’s North Side gang. Moran’s men, thinking it was a police raid, dropped their guns and put their hands against the wall. Capone’s gang leaded them with 150 bullets killing seven men, though Moran was in safety across the road. Capone had a watertight alibi – he was in Florida that day. City officials – reluctant to celebrate their dark past – have removed all signs of the garage’s existence and today the site is a fenced garden.

The Shoenberg Brewery is a magnificent old, brownstone building. In 1927 there were 30,000 ‘speakeasies‘ (so called from ‘speaking easy’ so that cops couldn’t hear) in the United States – twice the number of legal bars before the era of prohibition. Shoenberg was where Capone’s gang stored and brewed liquor to supply to the speakeasy racket.

Chicago’s other 1930s outlaw was John Dillinger, notoriousbank robber, murderer, and the nation’s public enemy number one – according to the FBI at the time. Every year in July, curious anoraks assemble to commemorate the death of this alternative folk hero outside the Biograph Theatre where he was betrayed to FBI agents by Romanian brothel-keeper Anna Sage. The agents took their cue to shoot Dillinger on spotting Anna’s striking red dress as she led him out of the cinema at 10.30pm on July 22nd 1934. During the commemoration, a procession leads to the very spot where Anna Sage and her girlfriend, Polly Hamilton, accompany an oblivious John Dillinger out of the cinema that fateful night. The event is replayed and re-enacted accurately, including the match lit by Special Agent Melvin Purvis which alerted fellow agents of the outlaw’s exit. The event’s highlight is the ritualistic pouring ofbeer over the exact spot Dillinger fell to the FBI’s bullets.

It was the anecdotes about Al Capone, that visitors love best on the tour.  They learn that Capone once sent $10,000 and flowers to a woman injured during an attempt on his life; he kidnapped a pianist, forced him to play at his speakeasy for three days, then let him leave after shoving $20,000 in his pocket; and bought a belt that spelled out “Thanks From Al” in diamonds for a newspaper reporter who tipped him about upcoming government raids.

After the tour, many head to Tommy Gun’s Garage, Chicago’s only speakeasy dinner theater, for lunch and a musical comedy revue that featured gangsters, flappers, and a raid by the cops. One lucky visitor gets brought up on stage for an interactive “sobriety test” and radio show.

Chicago Gangster Tours
The fascination with Chicago gangsters continues today despite the height of the gangster culture having taken place even before World War II. Here are some ways you can take a Chicago gangster tour and immerse yourself into the world of the likes of Al Capone and John Dilinger.
Biograph Theater
The landmark Biograph Theater on Chicago’s North Side is the site where FBI agents gunned down gangster John Dillinger in 1934. The Biograph is now home to the Victory Gardens Theater group.
Mount Carmel Cemetery – Burial Place of Al Capone
Mount Carmel Cemetery, located just outside Chicago in suburban Hillside, was established in 1900 and is the burial place of many notorious Chicago gangsters, including Sam Giancana, the Genna Brothers, and the most famous of them all, Alphonse “Al” Capone.
Tommy Gun’s Garage
For a more lighthearted look at Chicago’s gangster past, you can visit Tommy Gun’s Garage — an audience interactive dinner theater whose decor recreates a 1920s speakeasy where they put on a musical comedy revue.
Union Station Chicago
Historic Union Station is not only home to the Metra rail system — a major artery between Chicago and the suburbs — but it’s also the site where the famous “baby carriage” scene was filmed for the movie “The Untouchables”.
Untouchable Tours
Untouchable Tours offers a two hour bus tour of famous Chicago gangster sites, such as the Biograph Theater, Dion O’Bannion’s flower shop, Holy Name Cathedral, the site of the St. Valentine’s Day Massacre, and many others.
Who was Al Capone?
Capone was born in Brooklyn, New York in 1899 into a rough neighbourhood. At school he joined two gangs: the Brooklyn Rippers and the Forty Thieves Juniors. He quit school at fourteen to dedicate most of his adult life to the criminal fraternity, joining the Five Points gang in Manhattan, and working as a barman and bouncer in gangster Frankie Yale’s Harvard Inn. Here he received the wounds that gave him the nickname “Scarface“.

After killing two rival gang members in New York, he arrived in Chicago in 1919 to let things back in New York cool down and set up home at 7244 South Prairie Avenue. In Chicago he became the protégé of gangster John Torrio, becoming his business partner after just three years and taking over the racket when Torrio was run out of town. Capone ruled the city’s illegal vice network – comprising of brothels, speakeasies, gambling halls, race tracks, breweries, and nightclubs – between 1925 and 1930. His underground empire was rumoured to have netted an income of $100 million per year. He was run out of town to Florida in 1928. Capone was eventually caught by a bunch of determined Federal Agents, known as the ‘Untouchables‘, led by Eliott Ness, who procured to convict Capone on a simple charge of tax evasion in 1931. He died of syphilis in Miami, Florida in 1947.