Mr. Beer says FREE BEER in Chicago! Next Wednesday, Sept. 29, Mr. Beer reports that the Budweiser brewery is going to host the first free Budweiser National Happy Hour, where it will be giving away free Budweiser beer to anyone who wants one and is of legal drinking age in Chicago and many cities around the country (You have to be 21, of course.).  Mr. Beer says with flagging sales,  Budweiser is hosting a “national happy hour” offering free beer samples at bars and restaurants across the country, part of a promotion to increase sales among a coveted group of beer drinkers — 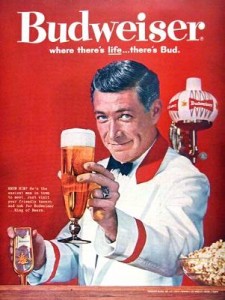 the under-30 crowd. According to the Florida Times-Union, four out of 10 people in their mid-20s have never tasted a Bud. It’s unclear exactly which bars and restaurants will be handing out free beer, so stay tuned.  As explained by USA Today the brewery begins its campaign on Wednesday, and expects by mid-October that they will have distributed five hundred thousand cans of Budweiser in pubs, bars and restaurants in the US.  Details are still a little sketchy so here are two articles reviewed by Mr. Beer with more info.  The free sample will be between 6 to 12 ounces depending on state and local rules.