Come out and meet actress and writer Amy Sedaris, who will be in Chicago at the Michigan Avenue Borders (830 N. Michigan Ave) this afternoon at 3pm to for a free book signing and will discuss her new book Simple Times: Crafts For Poor People. America’s most delightfully unconventional hostess and the bestselling author of I Like You delivers a new book that will forever change the world of crafting. According to Amy Sedaris, it’s often been said that ugly people craft and attractive people have sex. In her new book, SIMPLE TIMES, she sets the record straight. 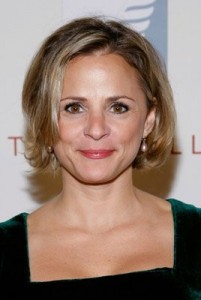 An alumna of the Second City and Annoyance Theatre in Chicago, Illinois.
Runs a cupcake and cheeseball business out of her Greenwich Village apartment when she is not acting.
Occasionally works as a waitress at Mary’s Fish Camp in the West Village.
Enjoys playing characters who “like themselves”.
Is of Greek descent.
Collects decorative cupcake picks.
She is best known for her grotesque yet strangely endearing character “Jerri” from “Strangers with Candy” (1999).
Raised Greek Orthodox.
She was nominated for a 1993 Joseph Jefferson Award for Actress in a Revue for “Truth, Justice or the American Way” at the Second City Theatre in Chicago, Illinois.