Beatles Song Downloads on iTunes! We are HUGE fans of the Beatles and while not free, we are all celebrating that you can now get the Beatles songs on iTunes for downloads

into out iPhone, iPods and iTouchs.  This has been many years in coming and we salute the Beatles and Apple in working out their differences!   Get the Beatles songs on iTunes here! 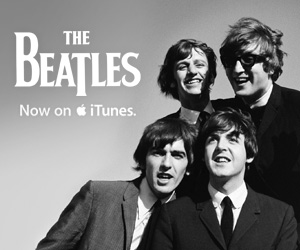 There are currently 55 Beatles songs in the Top 200 iTunes downloads, which means the Beatlemania has infected more than a quarter of the list. It’s not just individual songs that have been popular, either. All 13 of the Beatles’ studio albums were released on Tuesday in addition to a two-volume Past Masters set and the Red and Blue collections. Each of these is listed in Top 200. Even the lowest album on the list, “Beatles for Sale,” is still pretty popular at the 38th spot. iTunes currently lists three Beatles albums on its top 10. Abbey Road is in the number five position, Sgt. Pepper’s Lonely Hearts Club Band is number nine, and The Beatles 1967-1970 (The Blue Album) has grabbed the tenth spot.

“We’re really excited to bring the Beatles’ songs to iTunes,” former Beatle Paul McCartney said in a statement. “It’s nice to see the songs we originally released on vinyl receive as much love in the digital world as they did the first time around.” Each song is $1.29, single albums are $12.99, and double albums are $19.99.

Fans can also download the entire Beatles Box Set of songs on iTunes for $149.99, which includes a film of the band’s “Live at the Washington Coliseum, 1964” concert. Apple and The Beatles are allowing iTunes users to watch that film of the band’s first U.S. concert for free throughout the remainder of 2010.

Apple CEO Steve Jobs is said to be a Beatles fan, and has been in negotiations for years with EMI Group, the Beatles’ record label, and Apple Corps, the Beatles’ business group. But like all other Beatles fans, Jobs had to download song tracks from a CD if he wanted to listen to the British band’s songs on his iPod.