Are you interested in Chicago architecture? How about a FREE guided architectural tour of the Chicago Cultural Center, where you will be able to view the world’s largest Tiffany stained-glass dome, along with incredible marble, molding and ornate multi-colored mosaics. Chicago is home to many spectacular late 19th- and early 20th-century interiors that influenced the decorative arts throughout the country. Designed and produced by Chicagoans, many of these interiors are off the beaten path and out of public view. However, near the heart of the Loop sits one of the most accessible and finest examples of American decorative arts, created by a collaboration of Bostonians, Chicagoans and New Yorkers. Free tours of up to 20 people are presented Wednesdays, Fridays and Saturdays at 1:15pm, and all tours meet in the Randolph Street lobby. To schedule tours for groups of ten or more at other times, call 312-744-6630. 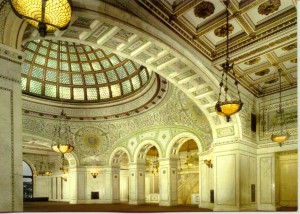 ABOUT THE CHICAGO CULTURAL CENTER

This is no “Second City” interior. It’s world class, and it’s open to the public year-round at the Chicago Cultural Center. Designed by Charles Coolidge of Shepley, Rutan & Coolidge (Boston), the Cultural Center was originally designed to house two entities, the Chicago Public Library in the south wing and a memorial hall for the Grand Army of the Republic in the north. The building was commissioned and designed in the heat of planning and showcasing Chicago’s 1893 Columbian Exposition to the world, and it was heavily influenced by the architects and decorative artists involved. This building originally served as the central library of the city and as a monument to pay tribute to the army during the civil war. Notice the Greco-Roman motif of the limestone structure which was pretty much the trend following the World Fair in Chicago back in 1893. In 1991, the city library was transferred to the Harold Washington Library. Today, the building houses the Office of Cultural Affairs. It also hosts special exhibits on a regular basis. Step inside and checkout the stained glass dome.

The interior represents Tiffany’s largest commission in nearly 50 years of production and includes the largest Tiffany dome (measuring 38 ft. in diameter); the most extensive use of Tiffany mosaics (more than 10,000 sq. ft. adorn the walls) and the earliest known examples of Tiffany’s copper-foiled chandeliers, pre-dating the company’s patent for the process. Copper-foiled lamps would soon become Tiffany’s greatest commercial success, contributing immensely to his world renown and establishing his reputation as America’s most accomplished decorative artist. The art-glass dome contains hand-rippled glass and plating (multiple layers of glass), a Tiffany trademark. There are approximately 30,000 pieces of glass in 243 “sections” covering more than 1,000 sq. ft. Repetitive fish-scale panels below the oculus are studded with 5,568 sparkling chipped-glass jewels that are copper foiled atop ruby-red backplates and soldered into the matrix. The leading was entirely floated with solder, indicative of the company’s impeccable craftsmanship.

Private Group Tours
Trained docents will conduct free, prearranged private tours for adult groups on Mondays though Fridays, 9 am-3 pm. Private tours are not available during weekends. Private tours are designed for adults and teenagers 13 years and over. Group sizes are limited, call for details. Reservations must be made at least one week in advance of the scheduled date by calling 312-744-6630. Private tours begin at the Chicago Cultural Center Information Desk in the Randolph Street lobby.

All self-guided group tours must check in with security upon entry.