Join IHOP on Tuesday, March 1, 2011, 7 a.m. – 10 p.m., for National Pancake Day and customers will receive a free short stack of IHOP buttermilk pancakes!* In return for the free flapjacks, we ask you to consider leaving a little something behind for Children’s Miracle Network Hospitals and other designated local charities.

Thanks to our guests’ generosity, IHOP raised more than $2.1 million last year. IHOP began its National Pancake Day in 2006, and since then, has raised $5.35 million for Children’s Miracle Network Hospitals and other local charities and given away more than 10.1 million buttermilk pancakes.The annual event is also a partnership to raise money for local charities.  IHOP hopes to raise $2.3 million in donations for Children’s Miracle Network and other local charities this year to beat last year’s $2.1 million.  Imagine giving away more than 10 million pancakes, too. 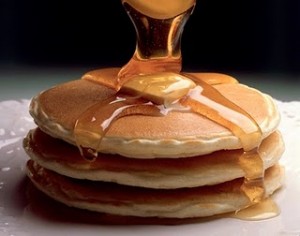