Get out your snow shovels and snowblowers :  MAJOR WINTER STORM TO IMPACT THE CHICAGO REGION TUESDAY AND WEDNESDAY….

HELP US HELP OTHERS – The Tribune has asked that during the blizzard, we submit reports or email information to snow@tribapps.com or…Send a text message to 69866 with ‘CHISNOW’ followed by your report.  Tell them about power outages, emergency situations, etc.  Check here for latest Chicago crowdsourced-news results

CHECK OUT AREA WEB CAMS The Wrigley Field webcam has a nice, clear picture of the slow-moving traffic and terrible weather in Wrigleyville. A few crazy pedestrians come in and out of the camera .  Wrigleyville BarCam also looks foreboding.  What does the WGN-TV Skilling Snow Cam from Tribune Tower on Michigan Avenue show?. Also check out the Field Museum webcam, which normally offers views of the city skyline and Lake Michigan. Today it’s all snow, all the time.

9:00pm — As of 9:30 p.m., a total of 79,000 customers are in the dark, with 46,000 of those in Chicago, ComEd spokesman Bennie Currie said. In the south suburbs, 18,000 are without power and in the north suburbs, 9,300 customers are affected. In the west suburbs, 4,600 are without power, Currie said. High winds are causing downed power lines, Zatkowski said.  ComEd saw a large drop in power between 6 and 6:40 p.m. with strong winds picking up, she said. One hundred crews are out working to fix the power and 135 will be out later Tuesday evening working to restore power.  To report an outage, call 1-800-Edison1.

8:35 update: Due to the high winds, a portion of a structural panel above the press box at Wrigley Field “broke away” tonight, scattering debris outside the ball park, officials said.  Chicago police cordoned off streets and

sidewalks around the park, while Cubs officials worked with the city to monitor the situation and ensure there weren’t any public safety issues, Cubs spokesman Peter Chase said.

8:30 pm update – The city closed all of Lake Shore Drive, soon after a CTA bus appeared to have spun out on an icy Lake Shore Drive, blocking northbound traffic near the Belmont Avenue exit.  The bus blocked three lanes of traffic, and motorists squeezed by in a fourth lane.  Chicago police confirmed that all northbound traffic had been closed as of about 7 p.m., so that emergency crews could handle the incident.

8:00pm UPDATE – A lakefront flood warning went into effect at 6 p.m. because of the possibility of 25-foot wind-whipped waves crashing  through the ice along the shore and washing over Lake Shore Drive. The left lane of the Stevenson Expressway near Martin Luther King Drive was closed in case traffic needs to be rerouted from the Drive.

Gov. Pat Quinn activated more than 500 Illinois National Guard troops to assist stranded motorists on interstate highways. The troops will be stationed at rest areas along interstate highways, including Interstate 70 and those north of I-70, and will coordinate with Illinois State Police to ensure the safety of travelers stranded along the roads.

Here are a few of the local snowfall totals as of 5:00 PM this evening

4:50 pm update: According to FlightAware.com, over 9,000 flights have been canceled between today and tomorrow, as of 1:30 p.m. FlightAware is showing 6,417 cancellations today, and 2,994 tomorrow. Hardest hit airports are Chicago O’Hare, Dallas Ft. Worth, and the New York-area airports. American alone has canceled over 700 flights today.

4:40 pm – With a possible record snowfall fast approaching, the City of Chicago has obtained 50 snowmobiles to try to ensure that firefighters can reach residents on snow-clogged side streets who might need their help tonight or tomorrow.

4:30 p.m. Window tears loose in the Loop – Chicago police suspect whipping winds may be responsible for a pane of glass tearing free from its rubber seal at a high-rise at 230 W. Monroe St.around 2:30 p.m.  The glass did not crash to the ground but was dangling from the Loop building, police said.

3:31PM  UPDATE: From bad to worse.   Winds gusting to 40mph will make this storm a showstopper.   A spotter in Tinley Park reports that visibility is down to zero with snow drifts building quickly.  In Watseka, IL, 75 miles southeast of downtown Chicago,  4.5″ of snow has fallen with whiteout conditions.

3:01PM  UPDATE: Heavy snow continues to overspread much the Chicago area at 3:00PM.  Heavy snow (S+) with visibilty of 1/4 of a mile or less is being reported at O’Hare, Midway, Aurora, Wheeling, Peoria, Lansing and Morris.   40mph winds whipping the heavy snow will make it almost impossible for road crews to keep highways clear.

The Great Groundhog Day Blizzard of 2011 is underway and the latest computer model guidance continues to paint a bullseye on the Chicago metro area. Snowfall totals of 12 to 24 inches are expected by Wednesday night. The snow is only half the story though as winds gusting in the 40 to 50mph range will create whiteout conditions, even when the snow isn’t falling heavily.  Snowfall totals are now already topping 20″ in Oklahoma.

A blizzard warning has gone into effect as the leading edge of a massive snowstorm hit Chicago area this afternoon.  The warning began at 3 p.m. and is to remain in effect until 3 p.m. Wednesday. The worst is expected to come between 9 p.m. today and 5 a.m. Wednesday with a snowfall rate of 3 to 4 inches per hour, Santiago said. Lake effect snow could add an additional 6 inches.It means falling and blowing snow with high winds very likely will lead to whiteout conditions. Travel is considered “extremely dangerous,” according to the National Weather Service.  “Do not travel!” the weather service warned. “If you must travel … have a winter survival kit with you. If you get stranded … stay with your vehicle.”  Chicago emergency officials offered similarly blunt advice:  “Every Chicago resident should brace for a storm that will be remembered for a long time,” said Jose Santiago, head of the Chicago Office of Emergency Management and Communications. “There is no reason to believe, at this point, that the storm will miss the city.”

Paul Konrad of WGNTV Tweets -“…..the latest model runs are still bringing in 12″-24″ of snow. Konrad”

The National Weather Service has issued a Blizzard Watch for the entire Chicago area effective Tuesday afternoon through Wednesday.   Snowfall totalsof 12-24 inches coupled with winds of 25 to 40 mph will make long distance travel extremely dangerous if not impossible.  This storms main impact is still 48 hours away, and an exact storm track is yet to be determined.  However, a majority of forecast model guidance suggests the heaviest snow should fall over northern Illinois and northern Indiana.   12″ to 24″ totals may be common with locally higher amounts of 20″+ possible.

FROM THE NATIONAL WEATHER CENTER
THE FIRST PHASE OF THE UPCOMING WINTER STORM WILL BEGIN MONDAY AFTERNOON AND CONTINUE INTO TUESDAY MORNING FOR PORTIONS OF NORTHERN ILLINOIS AND NORTHWEST INDIANA. SNOWFALL TOTALS FROM THE FIRST PHASE ARE EXPECTED TO BE BETWEEN 2 AND 4 INCHES ACROSS THESE AREAS.

THE FOCUS THEN TURNS TOWARDS THE LARGER EVENT BEGINNING TUESDAY AFTERNOON AND CONTINUING THROUGH WEDNESDAY. A DEVELOPING AREA OF LOW PRESSURE IS EXPECTED TO SLIDE EAST OF THE ROCKIES INTO EASTERN 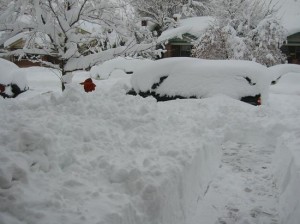 TEXAS MONDAY NIGHT AND RAPIDLY STRENGTHEN AS IT SLIDES NORTH TUESDAY. THE PRECISE TRACK OF THE LOW CONTINUES TO VARY SLIGHTLY WITH EACH NEW MODEL RUN…HOWEVER THE VARIOUS MODELS ARE CONVERGING ON A TRACK FOR THE SURFACE LOW FROM CENTRAL ARKANSAS TO CENTRAL INDIANA BY WEDNESDAY MORNING. THIS WOULD PLACE THE AXIS OF THE HEAVIEST SNOWFALL TO THE NORTHWEST OF THE TRACK OF THE LOW PRESSURE…OR ACROSS MUCH OF NORTHERN ILLINOIS AND NORTHWEST INDIANA. AS THE LOW PRESSURE CONTINUES TO SLIDE NORTHEAST AND STRENGTHEN…

NORTHEAST WINDS OF 20 TO 30 MPH ARE EXPECTED TO DEVELOP AND BRING A FLOW OF COLD AIR ACROSS LAKE MICHIGAN…AIDING IN THE GENERATION OF LAKE EFFECT SNOW TUESDAY EVENING. WINDS WILL CONTINUE TO RAMP UP WITH SUSTAINED WINDS TUESDAY EVENING BETWEEN 25 AND 35 MPH WITH GUSTS UP TO 40 MPH POSSIBLE. NORTHEAST WINDS THEN CONTINUE TO STRENGTHEN TUESDAY NIGHT INTO EARLY MORNING WEDNESDAY WITH GUSTS UP TO 45 MPH POSSIBLE. THIS…IN COMBINATION WITH THE FALLING SNOW…MAY CREATE BLIZZARD CONDITIONS AND WHITE OUT CONDITIONS. AS THE LOW PRESSURE CONTINUES TO LIFT INTO CENTRAL INDIANA WEDNESDAY MORNING…WINDS WILL BEGIN TO TURN NORTHERLY AND BRING THE LAKE ENHANCED SNOWFALL TO NORTHWEST INDIANA. BY LATER WEDNESDAY…THE SNOW FROM THE DEPARTING WINTER STORM WILL BE WINDING DOWN ACROSS THE AREA…BUT A BAND OF SIGNIFICANT LAKE EFFECT SNOW IS EXPECTED IN NORTHWEST INDIANA. SEVERAL INCHES OF ADDITIONAL SNOW ARE POSSIBLE BEFORE THE LAKE EFFECT SHIFTS FARTHER OFF TO THE EAST INTO SOUTHWESTERN LOWER MICHIGAN AND NORTH CENTRAL INDIANA. COMBINED SNOW TOTALS FROM THE MONDAY AFTERNOON THROUGH WEDNESDAY MAY EXCEED A FOOT AND A HALF ACROSS MUCH OF NORTHERN ILLINOIS AND FAR NORTHWEST INDIANA. SNOWFALL RATES UP TO 3 INCHES PER HOUR WILL BE PROBABLE AT THE HEIGHT OF THE STORM TUESDAY NIGHT. THE STORM SYSTEM WILL AFFECT A LARGE PORTION OF THE SOUTHERN GREAT LAKES…MIDWEST AND OHIO VALLEY REGIONS. ANYONE WITH TRAVEL PLANS TUESDAY AND WEDNESDAY…INCLUDING THOSE TRAVELING THROUGH CHICAGO OHARE AND MIDWAY AIRPORTS…SHOULD CONTINUE TO MONITOR LATER FORECASTS REGARDING THE DEVELOPMENT OF THIS WINTER STORM.