On Wednesday, March 30, from 6-8 in the Chicago Publishers Gallery in the Chicago Cultural Center, 77 E. Randolph St., Gina Frangello, Cris Mazza, Davis Schneiderman, and Zoe Zolbrod–four Chicago authors who have logged over 20,000 collective miles in 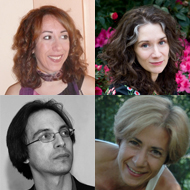 book tours this past year, often as a group–return gratefully to Chicago to celebrate not merely the city that works, but the city that makes their work. Interacting with the NEH-funded Virtual Burnham Initiative and Google Earth, and spotlighting areas from Wicker Park to Argyle Street to a futuristic Lake Michigan, these four writers address the city as guide, unreliable narrator, and creative muse at this free event, open to the public.

This free event will feature readings from these four authors focusing on specific neighborhoods in Chicago.  The authors will be accompanied by Google Earth projections of their featured neighborhoods.  This one-of-a-kind event will close with a choral reading derived from lines from famous Chicago literary works blended with lines from the works they have read.  To attend, RSVP to info@chicagopublishes.com.