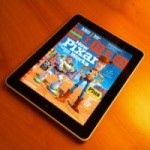 of Wired’s nearly year-old iPad app is free to download for the month.  Normally, its app costs the same $5 as its single-copy U.S. print price, a bargain only for overseas readers who sometimes pay $14 for a single copy (thank you, Øivind Idsø of Norway) and, in most of the world, $6 per edition even as subscribers.      Wired’s premier tablet edition was the June 2010 issue, and it sold a whopping 105,000 digital copies — 24,000 in the first 24 hours. In the ensuing months downloads have been in the 20,000-30,000 range as the publication made incremental tweaks in what has amounted to an extended, pre-subscription-era soft launch. Only with the May issue, the 11th, has the app incorporated tools to share on Twitter and Facebook — but still not yet for every story.

In press briefings before they released their app, Wired and Condé Nast executives emphasized that more and better features would be rolled out in the immediate coming months — including the leveraging of iPad functionality not tapped in the June issue — as part of a continuing R&D process.