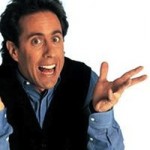 selected by Jerry, from among more than 1,000 stand-up bits he has collected and digitized. Recent comedy bits included “The Fattest Man in the World,” which was recorded on May 6, 1981, at Seinfeld’s first appearance on The Tonight Show Starring Johnny Carson. Other clips featured today are “No Room in the Newspaper” and “Do the Horses Know They’re Racing?”  Seinfeld says he was inspired to create this digital archive, remembering his experiences as a 10-year-old, fascinated by stand-up comedians on TV. “Somewhere out there are 10 year olds just waiting to get hooked on this strange pursuit.

This is for them,” he writes. “I’m just hoping somehow it will keep this silliness going.”  Ranging from less than 30 seconds up to two minutes in length, each daily grouping of three clips will only be available for 24 hours, after which they will be replaced by three new hand-picked bits. The clips cover the entirety of Seinfeld’s televised stand-up career, from 1977 to present, including appearances on talk shows hosted by Johnny Carson, Merv Griffin, David Letterman and Jay Leno, as well as other televised stand-up performances, including the stand-up performances recorded for the iconic TV series Seinfeld.