Come on out on Wednesdays for a free night of ComedySportz in Chicago as you get to see students compete on ComedySportz Training Center’s Free Night of Comedy.  This freebie goes through the summer until August 24. It’s FREE NIGHT OF COMEDY, ComedySportz’s Wednesday night salute to free laughs and cheap drinks. Wednesdays Starting at 8pm.
$3 Old Styles! 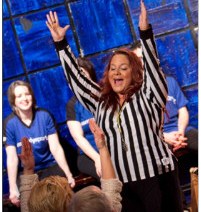