The people behind Walk Score, a Seattle-based service that rates the convenience and transit access of 10,000 neighborhoods in 2,500 cities, have spent the past four years judging the distance between 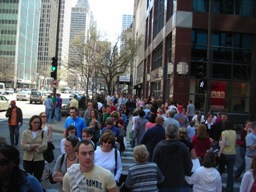 residents and amenities and ranking places based on the results. That “walkability” led to the first set of rankings in 2008 and the use of those rankings by more than 10,000 cities, civic organizations and real estate groups in the years that followed.  For a glimpse of what life is like in walkable America, take a look at Walk Score’s Top 10 most walkable cities of 2011 and the amenity-packed neighborhoods that made the difference:

CHICAGO
Chicago ranked as the 4th most walkable city in the U.S. this year as it’s restaurants, theaters, shops and other amenities are closer and more accessible the nearer one gets to Lake Michigan. Lake View and Wrigleyville or West Town and Wicker Park are great place for living car free. Stray too far west or south, however, and you’ll end up in the 4% of Chicago neighborhoods that need an automotive assist.

The Chicago Transit Authority helps level the extremely wide playing field with buses and trains that helped roughly 515 million riders get through the city last year. That includes the throngs of tourists and business travelers flying into O’Hare and Midway and taking CTA trains into the city. Another 70.5 million riders who take the commuter rail in from the suburbs each day make a strong argument to keep the car under wraps until the snow stops falling.

CLICK TO SEE Walk Score’s Most Walkable Cities of 2011