On October 15-16, 2011, Chicago will launch its own free architectural Open House weekend following in the footsteps of a growing number of cities around the world—including London, Melbourne, Barcelona, Dublin, Toronto, New York, and Denver. Sponsored by the CAF, Open House Chicago offers architecture buffs the chance to see, free of charge, more than 100 sites, 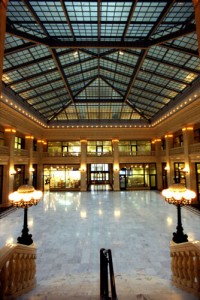 including many that are normally off-limits to the public (click at bottom for more info). “One of our goals,” says managing director Bastiaan Bouma, “is to reintroduce the city to its own residents.”  Cities like Chicago are launching free open house events as a way to engage the public in architecture and design. Click here to see the Chicago

Whether you are an architecture buff, history enthusiast, or cultural novice, OHC is a unique event that’s fun for all ages, locals and visitors, suburbanites and city dwellers. Participating in OHC is like getting a “backstage pass” to a wide range of Chicago’s most important and interesting buildings located in many different neighborhoods.    Although some buildings and sites are well known—the Newberry Library (Henry Ives Cobb, 1893), Tribune Tower (Howells & Hood, 1925), the Inland Steel building (Skidmore, Owings & Merrill, 1958)—others may be unfamiliar even to longtime Chicagoans. For example, the original, 14-story “Sears Tower” (Nimmons & Fellows), in the North Lawndale neighborhood, dates to 1906 and was once part of the catalog store’s sprawling headquarters. The 1925 Park Castle apartment, in West Ridge, designed by Jens E. Jensen, features a Moorish-style basement swimming pool. A private, elevated 2.5-acre park designed by landscape architect Alfred Caldwell, part of the 70-story Lake Point Tower residential building, has never been open to the public. Similarly, Frank Lloyd Wright’s 1915 Prairie-style Emil Bach House, in Rogers Park, is rarely open to visitors.

Some sites, says Bouma, have more cultural than architectural significance. For instance, the family-owned Fish Keg restaurant in Rogers Park is a simple brick-and-formstone storefront with an imposing neon sign, but it’s been serving fried fish, shrimp, and chicken to loyal customers for 60 years. Hungry Open House Chicago participants will be able to sample the restaurant’s homemade potato salad.

“Our model is a little different from some of the other Open House events,” says Bouma. “Even though architecture is a big part of it, we’re not giving it top billing. We want to highlight some of Chicago’s neighborhoods, not just downtown. And we want people to see how buildings contribute to the communities.”