With St Patrick’s Day just around the corner, let’s make some plans for this fun celebration where everyone is Irish for the week!  No city in the world does St. Patrick’s Day quite like Chicago. With our green river, green beer, and week long schedule of festivities, you won’t find a richer, greener celebration of St. Patrick’s Day this side of Ireland. Chicago’s St. Paddy’s Week kicks off Sunday, March 11th, with two parades.  Gaelic Storm (the band that performed in the movie Titanic) is performing Friday, March 16, 2012 at The Riviera in Chicago. The band plans on celebrating like never before and would like for you to join them in a momentous toast at midnight to ring in St. Patrick’s Day! Come out for the annual free St. Patrick’s Day Parade and free Greening of the Chicago River on Saturday, March 17, 2012 as well as other festivities held around Chicago.

This Northwest side Irish stronghold hosts its own FREE Saint Patrick’s Day Parade: this northwest-side version assembles at Onahan Elementary School (6633 W. Raven), heads down Neola, then turns up Northwest Highway to end at Harlem. Bobby Hull from the Chicago Blackhawks is among the special guests. Admission to the afterparty, from 1 to 5 PM at the Immaculate Conception Recreation Center, includes a corned beef and cabbage dinner (7211 W. Talcott, $10). Sunday March 11, noon, northwestsideirish.org. 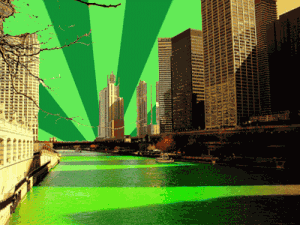 The free 57th annual St Patrick’s Day parade takes place at 12:00 noon, Saturday March 17, 2012, which begins at Balbo and Columbus Dr. and follows Columbus to Monroe St.     The Parade begins at noon on Saturday, March 17th. Head to the Buckingham Fountain Viewing Stand to see floats, bands, bagpipers, dancers and this year’s Irish Queen and her court.The parade is held on Saturday, the actual calendar date of Saint Patrick’s Day, which allows families to participate in the festivities without having to remove their children from school.  The parade takes place at 300 E Balbo Dr (312-421-1010, chicagostpatsparade.com). Saturday March 17 at 12pm; FREE

Dyeing the River Green – 10:00 am – March 17, 2012
Turning the Chicago river green has been unique to Chicago for the past 43 years. Most people did not know that this is a privately funded operation, which gets more expensive each year. In 2012, the plumbers union will be turning the river green on Saturday March 17, starting at 10:30 A.M.! This year they will be east of Wabash Ave, and west of Columbus Dr. The dyeing operation can be best viewed from the East side of the Michigan Avenue bridge, the West side of the Columbus Drive bridge or upper and lower Wacker Drive between Michigan Avenue and Columbus Drive.

The History Behind Dyeing the Chicago River Green

A modern day miracle occurs each year as part of the St. Patrick’s Day Parade celebration when the Chicago River turns an incredible shade of Irish green. This spectacular transformation ranks right up there with the parting of the sea by Moses and the Pyramids of Egypt.

For the past 43 years the Chicago River turns green for the St. Patrick’s Day Parade celebration. One would ask how this is different from the rest of the year when the river is always a murky shade of green. The difference is both significant and breathtaking because the color green is identical to the greens of Ireland from where it got its name “The Emerald Isle.” 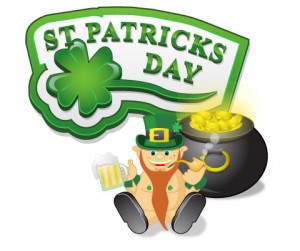 In 1961 Stephen Bailey was approached by a plumber who was wearing some white coveralls, they knew this only because they could see some of the original color. These coveralls had been mostly stained or dyed a perfect shade of green, an Irish green to better describe it. It was when Stephen Bailey asked how the coveralls got this way, that they discovered that the dye used to detect leaks into the river turned green, not just any color green, but the perfect color green. “A tradition is born”

Today this miracle belongs to Mike Butler and his crew, which he claims to always have a little help from a leprechaun who seems to just appear at this time each year.

If you were watching this for the first time you would think this is a mistake or a bad joke. You see the dye is orange and its initial color on the surface of the river is orange and you would think to yourself what heathen would do something like this. After a moment or two you then see the true color magically appear.

Two miracles appear that day, the river turns a perfect shade of green something that many other cities have tried but have not been successful at doing, and the second miracle by starting with the color orange giving the impression that river will be orange only to convert the river to that true Irish green. We believe that is where the leprechaun comes in.