Chicago will host the 12th World Summit of Nobel Peace Laureates April 23 – 25. Laureates will bring their messages of peace, human rights, and individual responsibility to students, government leaders, international dignitaries and the general public.  The three-day World Summit, themed “Speak Up, Speak Out for Freedom and Rights,” will feature moderated discussions with Nobel Peace Laureates that will be webcast around the world, providing a rare opportunity for audience members to observe and engage the world’s most notable figures in a discussion on global peace and human rights. 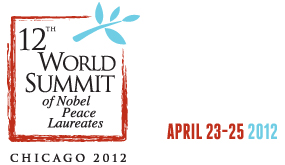 “Speak Up, Speak Out for Freedom and Rights,” on Monday, April 23, 7:00 AM – 4:30 PM, at Student Center West and the Forum at the University of Illinois at Chicago. This seminar is FREE to the first 100 registrants.

The seminar will provide a unique opportunity for teachers to engage in discussion on global citizenship, with morning workshops by the partners, a luncheon keynote from former President Jimmy Carter, and the opening afternoon of the World Summit with Nobel Peace Laureates. A draft agenda is available here. The seminar is accessible by CTA, and parking will be reimbursed.

You must be registered to attend, and the deadline is April 6. Register here.

Chaired by former Soviet President Mikhail Gorbachev and former Mayor of Rome Walter Veltroni, the 12th World Summit will have as its Honorary Chair Chicago Mayor Rahm Emanuel, and a Host Committee comprised of leaders from Chicago’s civic, academic and corporate communities.

The first World Summit of Nobel Peace Laureates was held in 1999 at the suggestion of the Gorbachev Foundation, and the summit has grown over the years, gaining in credibility and importance as it promotes international initiatives and campaigns to foster peace. Each summit’s location is chosen for its unique relationship to the theme of that year. For a look at past summits, visit Past Summits.

Chicago was selected as the first North American city to host the World Summit due to its rich heritage and international profile. Numerous Nobel Peace Prize winners have hailed from the Chicago area, among them Charles Gates Dawes and U.S. President Barack Obama. In 1931, Illinois native Jane Addams became the first American woman to be awarded the Nobel Peace Prize for her international peace efforts and work on behalf of Chicago’s marginalized immigrant communities.