Enjoy a free play and discover the work of French playwright Fabrice Melquiot, part of the International Voices Project’s 2012 theater season, and our 175 Days to Love Chicago pick for Tuesday, May 29. 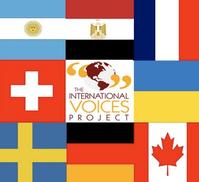 On Tuesday, May 29, enjoy Candle by Fabrice Melquiot, presented in collaboration with the Cultural Service at the Consulate General of France in Chicago, Alliance Française de Chicago, and Trap Door Theatre.

This tense and sensationalist play explores what happens when a Man and a Woman put their marriage on the line by inviting a stranger into their lives. Part houseguest, part pining lover, and part director-storyteller, the Other Man is a welcomed break from their dull but peaceful existence, but his vengeful moods and voyeuristic tendencies threaten to bring their intimacy to a violent end. Fabrice Melquiot’s Candle turns the tables on its audience, asking us to consider whether its final “coup de theatre” is worth the price.

See Candle by Fabrice Melquiot on Tuesday, May 29 at 7pm at the Alliance Française de Chicago.

Free admission with a ticket that can be reserved online. For more information, view our full event listing.