The Adler is celebrating the last Transit of Venus of the 21st Century with a free public observing event on June 5.   Adler staff and volunteers will be available outside on the north and west sides of the Adler to facilitate safe viewing of the Transit using specially outfitted telescopes. Visitors can speak with Adler astronomers and check out some unique astronomy tools, books, and works on paper dated back to the 1660s. This special viewing event is free to all members of the public beginning at 4 p.m.  And because it takes place on an Adler Discount Day, general admission for Illinois residents (with proof of residency) will be free all day.  Tickets to additional planetarium shows and tours will be available for additional fees. This will be the last one of our lifetime, as the next Transit will not happen until the year 2117. Join Adler astronomers to observe Venus as it passes directly between Earth and the Sun.  Venus will appear as a small dot moving slowly across the face of the Sun.  The Adler will have solar telescopes available for public viewing and also a live NASA feed from Hawaii’s Mauna Kea Observatory. 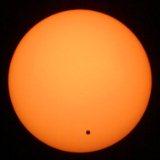 Telescope observing will begin at approximately 5:00 p.m. CDT and will end when the Sun slips behind the skyline of the city of Chicago at approximately 7:30 p.m. CDT. Similar observing events at the Adler have drawn hundreds of people.  Caution: People should never look directly at the Sun. They should view the Sun safely during the Venus transit by projecting its image on a screen or by using an approved Sun filter over the front of your telescope.

Visitors can learn more about Venus in the Adler’s newly redesigned exhibition Our Solar System, which incorporates high tech interactives and allows guests to touch actual pieces of the Solar System—Mars, the Moon and asteroids Ceres and Vesta.  The Adler is the only place on the planet where you can touch all four under one roof.    If visitors want to learn more about Venus, they can visit the Adler’s newly redesigned exhibition Our Solar System.  The new gallery incorporates technology and interactive exhibits to bring to life the fascinating stories of the Solar System.  Visitors can touch actual pieces of the Solar System — Mars, the Moon and the asteroids Ceres and Vesta.  An iPad controller allows guests to virtually explore the Sun and its surrounding eight planets.  Visitors can get an up-close look at a model of the “Opportunity” Mars Rover and check out updates on current NASA missions.