A new company called Coursera is offering  free online college classes this fall, including University of Illinois and the University of Michigan.  (click at bottom for more info) 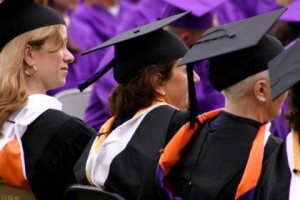 By teaming up with Coursera, one of several new online education companies, the University of Illinois will dip a toe into a fast-growing trend in higher education to offer free courses to an unlimited number of students. It’s a low-risk venture compared with the U. of I.’s failed and expensive Global Campus online initiative from several years ago.

The Urbana-Champaign campus is one of a dozen universities that have announced partnerships with California-based Coursera, joining Princeton University, Stanford University, the University of Michigan and the University of Pennsylvania, which joined earlier this year. Chancellor Phyllis Wise says the U of I is the only land-grant university on the list and that means Illinois has expertise in areas that other schools don’t. The first U. of I. courses — in subjects including organic chemistry, microeconomics and programming for smartphones — will begin this fall. Future online classes could include veterinary medicine and agriculture.  They won’t count toward a degree.

So far they’ve signed up volunteer professors from Stanford, Princeton, University of Michigan, and University of Pennsylvania. Coursera will offer 35 free college courses in subjects ranging from math and computer science to world history and contemporary American poetry. These aren’t just videotaped lectures; they’re full courses, with homework assignments, examinations, and grades. About 30 classes are scheduled to start through early 2013. They include a 12-week class titled, A History of the World Since 1300, offered by a Princeton professor, a six-week Computer Science 101 class from Stanford and a 4-5 week Fundamentals of Pharmacology class from Penn. Coursera built the software using Amazon.com Inc.’s (AMZN) cloud- computing services. The technology includes video lectures in 10- to 15-minute clips, in-video quizzes, auto-grading software for instant feedback and a question-and-answer community that lets students help each other.

“Today universities can offer a great education to a tiny sliver of the population. What we’re hoping to do is provide the technology to enable a university like Princeton to offer an education not just to hundreds or thousands of students, but to millions,” Koller says.  Coursera grew out of an experiment Ng and Koller carried out last fall, when each made a class available at no cost online. Ng’s class in machine learning drew more than 100,000 enrolled students, 13,000 of whom completed the course. The huge interest convinced Ng and Koller they were onto something. Others agreed, including two of the best venture-capital firms in the valley, Kleiner Perkins Caufield & Byers, and New Enterprise Associates, which have invested $16 million combined in Coursera.      Coursera co-founder Andrew Ng (eng) says the courses his company hosts are free, but universities may get some revenue from charging students $30 to $80 for a certificate showing they completed a course.