If you’ve ever wondered about some of the earth’s most ugly buildings, then take a look at these unseemly architectural monstrosities. “The ugliest buildings are the anonymous ones,” says Christopher Bonanos, who edits architecture criticism at New York magazine. “Even if an experimental, high-profile building doesn’t quite deliver, at least the architect is trying something.  To compile their list of the world’s ugliest structures, Travel & Leisure Magazine consulted with architects and design experts as well as the general public. Pretty much everybody had something to say. For instance, there aren’t many admirers of the spherical houses on long pole “stems” planted, like so many mushrooms, in the Netherlands. 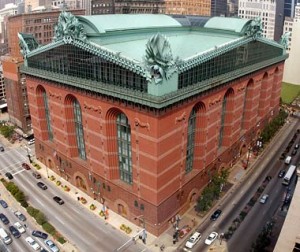 (The architect was given free rein courtesy of a Dutch subsidy for experimental housing.) Then there’s the midwestern corporate headquarters that takes the form of a huge picnic basket. Sure, it’s funny from the outside, but probably not for the employees of Longaberger, in Newark, OH, who have to go work in a hamper every day.

Many designs around the world inspire love and hate in equal measure. A prime example would be the glass-and-metal pyramid I. M. Pei designed as a new entrance for the Louvre Museum in the 1990s. “Your pyramid is magnificent,” protagonist Robert Langdon tells a Parisian official in The Da Vinci Code. “A scar on the face of Paris,” the man retorts.

Harold Washington Library, Chicago If buildings came with footnotes, this one, named for a beloved former mayor who deserved better, would have pages worth of citations. Neoclassical references collide with a glass-and-steel Mannerist roof; throw in some red brick, granite, and aluminum—and a bad sense of scale—and you’ve got way too much architecture class for one day.   The Ugly Truth: Opened in 1991 and designed by the firm Hammond, Beeby, and Babka, the Chicago public library has a helter-skelter application of motifs and styles that’s “locked in the postmodern era,” says Peter Koliopoulos of Circle West Architects in Scottsdale, AZ.

DO YOU AGREE?  Let us know in comments section or on Facebook