If you are visiting Chicago or just making plans for the summer, check out our list of MUST-DO events in Chicago, which include concerts, neighborhood festivals, lakefront activities, downtown Chicago activities and more!  So get out your calendars and begin to reserve these dates for awesome Chicago fun! 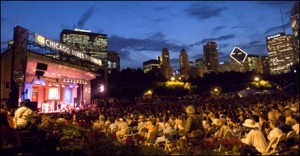 MB Financial Bank Bike the Drive
June 6 – June 9
The highly trafficked Lake Shore Drive is shut down for a day as thousands of cyclists pedal the 30-mile-long street.

Chicago Blues Festival
June 6 – June 9
The largest free blues festival in the world features famed performers who play to more than a half million music fans.

Twix Presents: TBS Just for Laughs Chicago
June 11 – June 16
Some of the country’s funniest comedians and popular headliners will be in Chicago for a week long laugh fest.

Taste of Chicago
June 9 – June 13
One of the world’s largest food festivals takes over Grant Park with live musical performances and, of course, a showcase of the best area restaurants.

Chicago Air & Water Show
August 17 – 18
The largest free show of its kind in the country brings people to the lake front for a jaw-dropping demonstration of boats and planes.

Belmont-Sheffield Music Festival
May 25-26
Where to find it: Lakeview – N. Sheffield Ave. between Belmont Ave. and School St.
Boasting some of the best local music acts in town, this fest is where you can explore arts, crafts and fashion while enjoying a variety of food and drink.


Chicago Gospel Music Festival
June 20-23
Where to find it: Various locations
Renowned gospel artists perform on stages throughout the city, including Ellis Park.

Pitchfork Music Festival
July 19-21
Where to find it: Union Park
A launching pad for major music careers, Pitchfork is where you can discover more than 40 of independent music’s best bands and artists.

Chicago Jazz Festival
August 29-September 1
Where to find it: Millennium Park
This 35th annual free event is known for attracting some of the top names in jazz for four days of blowout tunes.

North Coast Music Fest
August 30-September 1
Where to find it: Union Park
This free-spirited fest, which bills itself as “Summer’s Last Stand,” features hip-hop, electronica and jam bands as well as food vendors and craft beer.

Mayfest
May 17-19
Where to find it: Lakeview – Ashland Ave. and Barry Ave.
German food, dancing and plenty of beer are the mainstays of this festive summer event.

Andersonville Midsommarfest
June 7-9
Where to find it: Andersonville – Clark St. between Foster Ave. and Catalpa Ave.
Join more than 50,000 people for two family- and LGBT friendly days of music, entertainment, food and artisans showcasing their wares.

Wells Street Art Festival
June 8-9
Where to find it: Old Town -Wells St. between Division St. and North Ave.
See eclectic pieces of art – from paintings to glasswork- by more than 250 juried artists at this fest, one of the city’s largest and most acclaimed fine arts happenings.

Fourth of July Fireworks
July 4
Where to find it: Navy Pier
Watch the sky light up during a spectacular fireworks show choreographed to a patriotic score.

Windy City Ribfest
July 5-7
Where to find it: Uptown – Lawrence Ave. and Broadway St.,
The best local and national ribbers mix it up with three days of classic and hot music acts at this fifth-annual summer festival.

Green City Market Chefs’ BBQ Benefit
July 18
Where to find it: Lincoln Park
See nearly 100 of the city’s celebrity chefs partner with Chicago farmers to create dishes from a bounty of local foods, from meats to produce to cheese.

NEW AT THE MUSEUMS:

“Scenes from the Stone Age: The Cave Paintings of Lascaux”
March 20-September 8, 2013

In September 1940, four teenagers stumbled across engravings of animals in a cave in southern France. Little did they know they’d stumbled across priceless works from our early ancestors more than 20,000 years ago. The Field Musuem is unveiling a monumental re-creation of the cave with full-size replicas of the artwork, including some never-before-seen paintings.

Explore the mysterious world of creatures that blink, glow, flash and flicker, from glowworms to illuminated deep-sea fish.

The makers of BODY WORLDS give you the chance to explore the inner workings of some of the world’s most impressive animals.

The Art Institute of Chicago

In November 2012, the Art Institute of Chicago celebrated the opening of the new Mary and Michael Jaharis Galleries of Greek, Roman, and Byzantine Art with a special presentation of late Roman and early Byzantine treasures from the British Museum. The exhibition features more than 35 incomparable examples of late antique and early Byzantine art produced between A.D. 330-700 in the period’s great cultural capitals, including Rome, Constantinople, and Alexandria.

Picasso and Chicago tells the story of this unique 100-year relationship between the artist and the city. It documents the development of Picasso’s career alongside the growth of Chicago’s collections and cultural institutions. The exhibit brings together over 250 of the finest examples of the artist’s paintings, sculpture, prints, drawings and ceramics.

Travel back to 1860-1880s France to see the worlds of art and fashion collide through nearly 80 major figure paintings, portraits, photographs, advertisements and contemporary costumes.

Relive the experience of the Ebony Fashion Fair, as garments from Oscar de la Renta, Christian Dior and more tell the story of this world-renowned fashion show.

Shedd Aquarium invites guests to explore the underwater grace and wonder of stingrays in a new hands-on special exhibit. The outdoor seasonal exhibit will allow guests to see – and feel – the texture and movement of these gentle gliding animals.