Come out and see a Chicago icon for FREE! Make your way downtown to Grant Park in Chicago to see a free water display every hour at the Buckingham Fountain in Chicago from mid-April to mid-October. The best time to go is between dusk and 10 p.m. when the fountain’s 134 spouting jets are accompanied by a music and light display. 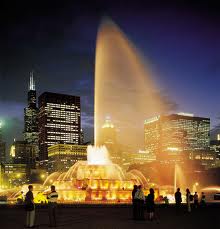 The Clarence F. Buckingham Memorial Fountain, one of the largest in the world, is located at Columbus Drive (301 East) and Congress Parkway (500 South) in Grant Park in Chicago and runs from 8 a.m. to 11:00 p.m. daily, typically from April to mid-October, depending on weather. Times are subject to change when large events take place in or around Grant Park. While in operation, every hour on the hour for 20 minutes the Fountain produces a major water display and the center jet shoots 150 feet into the air. The initial major display begins at 9:00 a.m. and thereafter, is every hour on the hour. Beginning at dusk, every hour on the hour for 20 minutes the Fountain’s major water display is accompanied by a major light and music display. The final display of the evening begins at 10:35 p.m.

The water displays are powered by three pumps:

The Fountain has 134 jets in the following configurations:

36 jets point upwards from the top basin, including a central jet to produce a 150-foot geyser
34 jets at the consoles 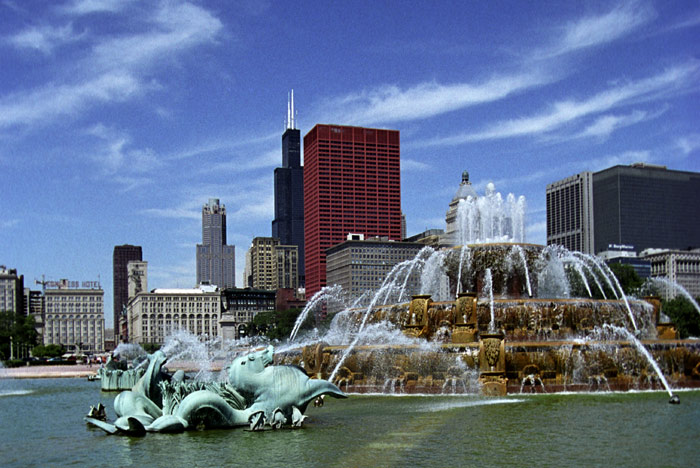 The Fountain’s water capacity is 1.5 million gallons. Depending on wind conditions, major displays use approximately 14,100 gallons of water per minute conveyed through 134 jets. Water is re-circulated from the base pool after the basins are filled and not drawn from the outside except to replace losses from wind and evaporation.      The bottom pool of the fountain is 280 feet in diameter, the lower basin is 103 feet, the middle basin is 60 feet and the upper basin is 24 feet. The lip of the upper basin is 25 feet above the water in the lower basin.     The underground pump room is 35 feet long, 25 feet wide and 25 feet high.

Kate Buckingham envisioned a fountain whose effect was that of “soft moonlight.” She worked many nights with technicians, testing the various colors of the glass filters and currents to produce an ethereal, mystical aura.      The Fountain contains 820 lights in the following configurations:

The computer known as the Honeywell Excel-Plus is located in the Fountain’s pump house. The computer was moved here from Atlanta, Georgia, during the 1994 renovation.    The Fountain’s alarm, a system similar to a store alarm, is monitored and dispatched through Honeywell Central Station in Arlington Heights.