Head over to iTunes to download a free Lego Star Wars The Yoda Chronicles App! The Lego Group recently announced that, in celebration of Star Wars Day on May the Fourth (Get it!), the publisher will be releasing its latest game, The Yoda Chronicles free on iDevices. These Lego games tend to do quite well, so we’re imagining that a free one is going to go over just fine on iOS.

In The Yoda Chronicles, players will be able to take on the role of the pint-sized Jedi himself or Count Dooku, giving access to both Light and Dark sides of the game. A sort of strategy adventure hybrid, players will take part in real-time laser battles, explore dungeons, compete in lightsaber duels and even enjoy some space combat. The game will contain 15 main levels, half of which will be available on May 4th for iOS and the other half becoming available this summer when the game finally launches on Android. 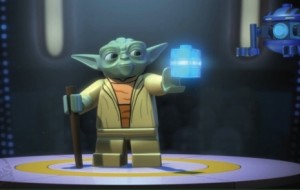 Along with the campaign, players will be able to play five mini-missions for better pick up and play options, which tasks Yoda or Dooku with defeating as many enemies as possible. Doing well in these levels will up your stats and abilities in the campaign.

The Yoda Chronicles will also boast 20 achievements and the ability to search for secret codes hidden throughout the Chronicles of Yoda mini-movies and website to unlock bonus units, perks and content. You can start plowing through that content and searching for codes whenever you feel like it.

For hundreds of years Yoda™ has trained the Jedi Knights™ of the future, but never for something like this. The Dark Side is preparing a weapon more powerful than any Jedi™ has ever faced before. Play now to take control of the galaxy! Build, create and control your favorite characters and vehicles to smash your enemy, solve puzzles and complete challenges within the LEGO® Star Wars™ universe.

For more information about LEGO Star Wars, visit LEGO.com/starwars May the Force be with you!