The Bioshock Triple Pack offers a triple Download this week for 75% off at $19.99!  These three games are amazing and worth way more than the normal price of $49. BioShock and BioShock 2 take place in Rapture: A city under the sea. BioShock Infinite, which is the newest game in the series, takes place in a city 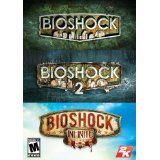 in Columbia: A city in the sky.

In the original BioShock you play as a man named Jack in 1960. After your plane crashes in the middle of the Atlantic Ocean you are the sole survivor. You swim to a lighthouse in hopes of finding rescue and while traveling in a bathysphere you come a cross the underwater city of Rapture. It was built in the 1940’s by a billionaire named Andrew Ryan who wanted to build a city free from the parasites of government and religion. He brought the most brilliant people who would live in the city and thrive.