Experience the Harry Potter stories like never before with the new FREE Pottermore.com site from J.K. Rowling. Learn more about the wizarding world as you discover exclusive new writing from the author herself. Explore key scenes from Harry’s journey and begin your own. Experience it all for free. 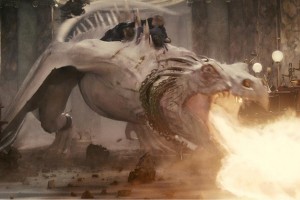 Also big news that J.K. Rowling Will Write a New Harry Potter Movie. After she made a half billion dollars as a fantasy novelist whose Harry Potter books sold 150 million copies worldwide that were adapted into a blockbuster film series, Rowling has now added a new line to her résumé: Hollywood screenwriter.

This week, Warner Bros. announced plans to make a series of films based on Rowling’s 2001 Hogwarts textbook, Fantastic Beasts and Where to Find Them, which as the author explained on her website, isn’t a Harry Potter sequel but “an extension” of the world that he inhabited. Instead of hiring someone to adapt the book to film, Warner Bros. has hired Rowling to do so.