Check out all the Halloween 2013 events at Chicago’s Navy Pier, including fireworks, a haunted house, zombie paintball shooting, zombie makeover booth and fire-spinning .

Zombie Army Productions is thrilled to announce that the award-winning Fear Haunted House is returning to Navy Pier for 2013! This October will feature both an aggressive adult-themed haunted house at night and a low scare, lights on attraction during the day. Bring out your inner Zombie with face painting or arm yourself with paintballs at their “Zombie Hunt Shootout.” Plus there’s master pumpkin carving (Friday, October 25, 5 p.m. to 9 p.m.), a costume contest on Saturday October 26, trick-or-treating on the 26th and 27th (noon to 4 p.m.) and……. 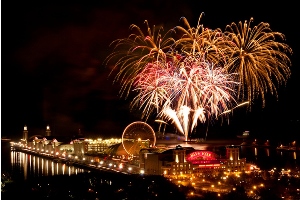 FREE Halloween fireworks set to a spooky soundtrack on Saturday October 26 at 9:30 p.m.

The Fear and its creatures are back from the dead and ready to scare you to death….! The award-winning Fear Haunted House is an aggressive adult-themed haunted house nighttime experience. On Saturdays and Sundays and Columbus Day, it is a low scare, lights on attraction during the day. Please note that The Fear uses strobe lights, low lit scenes, claustrophobic rooms, smoke effects and loud noises. No flashlights, cell phones, lighters or light devices, smoking, large bags, food or drink is allowed inside The Fear. Persons 15 and under must be accompanied by a paid adult. Children cannot be carried and strollers are not allowed through The Fear. All guests regardless of age must have a paid ticket to enter. Visit www.thefearhauntedhouse.com for more details.

It’s you against a charging zombie.  Do you have the guts to splatter his? Just $5.00 to test your Zombie hunting skills and impress your friends, if you have any left! Zombie Hunt Shootout at The Fear at Navy Pier is open during all The Fear and The Fear(less) operating hours.  $5.00 shooting tickets sold walk-up on-site only, no advance purchase available for Zombie Hunt Shootout.  Age, height, weight and other restrictions may apply. 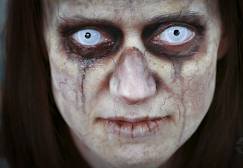 Professional make-up artists are waiting to transform you into a zombie!

Glow and Fire Spinning
by Pyro and Penumbra of Imaginez Ensemblez

Pyro and Penumbra will be lighting up Navy Pier’s Halloween festivities this year with some sizzling fire spinning! Sparky, Bunsen and Ember are creepy creatures of the night who will thrill and delight you as they dance with fire to the tunes of the Zombie Zydeco Band. Look for their crazy antics along the dock leading you to The Fear’s Haunted House at the far east end of the pier.  Featuring fire poi, fans, staff, devil sticks and more this is one party you do not want to miss!