The FREE Chicago premiere of American composer Ricky Ian Gordon’s Orpheus & Euridice is a partnership with the Chicago Park District’s Classics in the Parks Series.    The series of four free performances, given in partnership with the Chicago Park District, begins this weekend and runs through Nov. 10 in the Eckhart Park Pool on West Chicago Avenue. (click at bottom for more info)

You’ll enjoy seeing 140,000 gallons of Chicago water transformed into the River Styx for this FREE imaginative retelling performance of the ancient myth about eternal love. Navigate the watery underworld with Orpheus as his clarinet soars, searching for his lost love, his only happiness. Since the 2001 premiere of “Orpheus,” the piece has traveled to various cities in various versions, including a choreographed production given in New York in 2005 as part of Lincoln Center’s “New Visions” series. 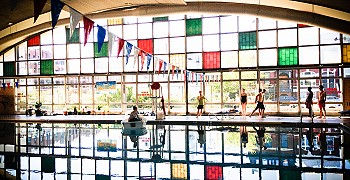 Gordon admits he was deeply skeptical when Mitisek first proposed mounting the song cycle in a public swimming pool. But once he saw how well the concept worked at the first rehearsal in Long Beach, he was completely won over. COT’s production will deploy eight performers inside and outside Eckhart Park’s indoor pool, including extras who will assume different roles in the story. “Some people will jump into the water, others will slide in, and others will float. Valerie will slip in and out of her dual role as Euridice and the Storyteller. Todd will get to go in the water with his clarinet. Water is a wonderful thing to play with.

“For our first rehearsal we had everybody bring their swimsuits. They were in the pool for four hours, swimming, running, jumping, pushing and pulling things. At the end of the day, someone asked me, ‘Are we getting paid for this?’ ”