Right now you can download Kanye West’s latest album,  ‘Yeezus’ for free from the Google Play store! The eccentric artist’s Grammy-nominated album, Yeezus, is the most popular freebie being given away on Google Play Music. Get it at the link below before it’s too late.   Here is what the Chicago Sun Times said about it:

With every media rant about his “brand” and how he wants to sell more “product,” plus his embrace of a certain reality star, defending Kanye West the celebrity has become more and more difficult. But West as musical provocateur? Much easier. This supersized and often musically jarring album, his sixth, challenges listeners to confront issues we often don’t: self-imposed racism, rampant consumerism, and mass incarceration. The sound of this dark album is what pushes it home: avant industrial rock elements locked with hip-hop romance. If there is one album to stuff inside a time capsule to represent 2013 to future generations, this is it. 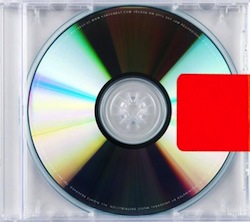 If hip-hop isn’t your thing, Google Play is also giving away The Bones of What You Believe by CHVRCHES, the Scottish, synth-pop band.

As part of its holiday sale, Google Play is offering discounts on several 2013 releases. Most notably, Kanye West’s Yeezus and CHVRCHES’s The Bones of What You Believe In, two of the year’s best albums, are available for free download.     Also in the bargain bin are Arcade Fire’s Reflektor, Lorde’s Pure Heroin, Drake’sNothing Was the Same, M.I.A.’s Matangi, Janelle Monáe’s The Electric Lady, Danny Brown’s Old, James Blake’s Overgrown, Rhye’s Woman, Pusha T’s My Name Is My Name, Pearl Jam’s Lightning Bolt, The Weeknd’s Kiss Land, and Neko Case’s The Worse Things Get, The Harder I Fight, The Harder I Fight, The More I Love You.