If you got your iPhone 5s recently, you might have set up TouchID already when you set up the new iPhone. A major new feature of the iPhone 5s is the Touch ID fingerprint scanner. As part of the new home button, Touch ID lets a user scan up to five fingerprints that can be used in lieu of a passcode to unlock the device as well as authorize iTunes and App Store purchases.  Here’s a FREE complete guide on TouchID so you can setup, edit, delete and manage fingerprints in TouchID (along with more information about the new feature). 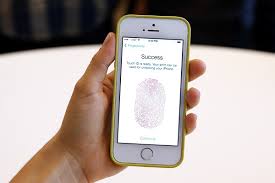 With the new fingerprint ID system on the iPhone 5S, there’s no longer a reason to avoid protecting your phone with a passcode. Passcodes can slow you down. But your fingerprint now bypasses the need to type in a four-digit code in many situations.  BEST TIP:  The screen needs to be on for the fingerprint sensor to work. To save a step, just press on the home button firmly and let the button pop back up. But keep your finger lightly touching the button’s surface. The hard press will activate the screen, and the light touch will unlock the phone

It’s easy to set up. The iPhone will walk you through scanning one finger when you set up the phone. You can scan four more fingers — yours or someone else’s — by going to the settings. Go to “General,” then “Passcode & Fingerprint.”   You’ll still be confronted with passcode screens on occasion, especially when you need to authenticate an app purchase. But even though you’re asked for a passcode, the fingerprint usually works unless the phone specifically tells you otherwise.      Users who set up their new iPhone 5s will be prompted to add a fingerprint for the Touch ID sensor integrated into the home button. But up to four more separate fingerprints, for a total of five, can be added later in the iOS 7 Settings application, where other changes can be made to enhance security.

Setting Up A New Fingerprint for TouchID

While one finger is already set when you setup the iPhone for the first time (unless you choose not to setup TouchID), you can actually setup five fingers for TouchID. Here’s how to add more fingerprints on the iPhone 5s:

Now when you setup a new fingerprint, you will find that you’ll have to be patient while you setup. Here are some tips that can help:

Editing the Name of a Fingerprint

By default, iOS 7 names the fingerprints automatically with a number suffix (Finger 1, Finger 2 etc.). You can edit these names to more accurate descriptions just to make sure you know which fingers have been scanned. To Edit:

TouchID can also be used – instead of entering your Apple ID password – to make purchases. You always have the option of using the alternative way of authenticating the purchases (entering Apple ID password) even when you have TouchID enabled.

TouchID cannot be used if you’ve set a restriction on the password (for purchases). Go to Settings → General → Restrictions → Require Password and change it to anything other than “Immediately”. 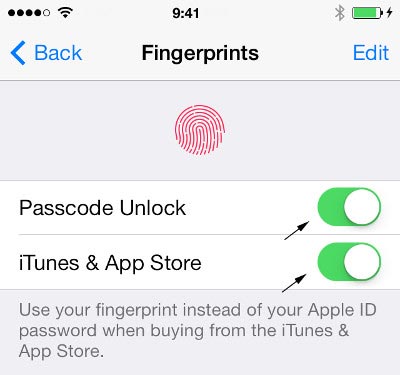 When Does TouchID Require a Passcode/Password Too

Apple has programmed TouchID to be disabled until you enter the passcode under certain scenarios: