The Chicago Improv Festival is in full swing from March 31 to April 6 with some free shows (CLICK HERE FOR FREE SHOWS) and improv troupes from around the world who attend workshops and to perform at the festival’s dozen-plus intimate venues scattered around Chicago and in Schaumburg.  The 17th annual Chicago Improv Festival takes over the city for a week, showcasing the best local, national and international on-the-spot comedic talent! More than 150 teams in over 90 shows on 20 stages (CLICK HERE FOR SCHEDULE) will be featured in the following categories: Long Form, Short Form,Emerging Artists, Musical, Dramatic (new for 2014), Experimental, Alternative, Genre, Puppetry, CIF Latino, and Open Stage. 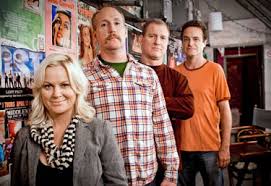 “Chicago’s legacy with comedy, especially with improv, is so great I think to a certain extent that Chicagoans have every right to be arrogant,” said Parker Bowles, a member of the improv troupe Damaged Goods from Louisville, Ky.   There are international troupes from Italy, Brazil and New Zealand. In addition, there is diversity in the acts themselves since the festival was restructured a couple of years ago around more defined improv categories and genres including short form, long form, musical, experimental and even puppetry.

Mullaney says that competition to get into the festival can be fierce, particularly in the long-form category. So to give up-and-coming performers a better chance, the Chicago Improv Festival added an emerging artists category and also expanded its open stage program of free shows.  Mullaney is proud of CIF’s headliner acts this year, particularly the appearance of Matt Besser, Ian Roberts and Darien native Matt Walsh in CIF’s closing show. The three — along with Amy Poehler — are the original founders of the influential Los Angeles and New York improv comedy powerhouse Upright Citizens Brigade.     “I knew that I wanted to bring UCB in one of these years, and when they released their book last August, I knew this would be a really great year to bring them in,” Mullaney said, glad that the promotional book tie-in opportunities for “The Upright Citizens Brigade Comedy Improvisation Manual” worked as a CIF lure. “When I contacted them I was hoping to get two of the three guys who wrote the book, but I’m really excited that all three of them are coming.”

Other major headliners include “Saturday Night Live” alum and Naperville native Paul Brittain (performing with Jet Eveleth), “SNL” veteran and Second City alum Horatio Sanz (performing as part of the Comedy All Stars) and Second City alum Dan Bakkedahl (“The Daily Show With Jon Stewart,” “Veep”) performing with Annoyance Theatre co-founder Ed Furman as part of the show “Trainwreck.”     But CIF also offers plenty of opportunities to see rising talent, too. Naperville resident Rose Ryan, 34, works as an English teacher at Schaumburg High School for her day job. But Ryan is making her CIF debut as part of The Church of Saturday Saints, a troupe that got its start as a yearlong music improv conservatory class at The Second City Training Center.

Locations (in Chicago unless noted):