The Chicago Millenium Park Film Series includes free movie offerings this summer of 2014 at the Jay Pritzker Pavilion in Millennium Park.    The series continues every Tuesday evening through August 26, 2014 and will highlight Ghostbusters on June 249 as well as musicals including “DreamGirls” . The series’ films will be presented on the latest and most sophisticated outdoor screen with sound projected from the Pavilion’s state-of-the-art sound system. 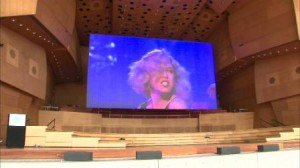 The screen was acquired by Millennium Park, Inc. to serve as a permanent enhancement to the Pritzker Pavilion. It measure 40 feet long and 22.5 feet high with an LED system and technology that is similar to that of a giant-screen television. The images are bright, clear and visible from the front row to the back of the lawn seating area. Both live and recorded presentations can be seen either day or night. All film screenings will begin at 6:30 p.m.

The schedule for the second summer series of free outdoor film screenings at Millennium Park’s Pritzker Pavilion is as follows. The 10-week series will begin on June 24 and the films will start at 6:30 p.m.

July 29: “This is Spinal Tap,” presented with WBEZ’s Sound Opinions