Thinking about Culinary Arts School in Chicago?  Do your research —

Read up on as many culinary schools and programs as you can to find the right fit. Consider the duration of programs, and what the class requirements are. Go to an open house. Le Cordon Bleu Chicago in River North hosts a monthly open house that includes cooking demonstrations; lunch is part of Kendall’s tour.   Many schools are more multi-faceted than people realize. Some schools offer certificates and associate degrees. Kendall College offers full- and part-time bachelor’s programs in various concentrations, including foodservice management and childhood nutrition.  But it is more than cooking — you will get a well-rounded class schedule…   “I had never taken any accounting, and accounting was a requirement at Kendall,” says Jill Houk, a former information technology sales exec who now is a consultant to food companies. “Just understanding billing and cash flow . . . the nitty-gritty of how a business operates was especially good.” 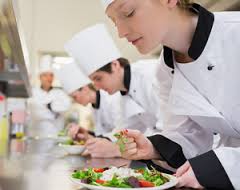 One of the most exciting things about studying food in the Windy City is the sheer number of professional influences that serve as the extracurricular environment for students at culinary schools in Chicago. There are enough top-tier restaurants in the area that at least a few lucky graduates are sure to find their way onto the line in a kitchen where dreams are made (and served).

Another boon for students of Chicago culinary schools are the numerous under-the-radar establishments, such as Skylark on Halsted Street, where fresh and local vegetables go into the salads, vegetables are fresh and local, and housemade applesauce is served with the pierogi. It is at such places where future chefs can get industry experience before, while or after they learn the finer points from their academy education.

Chicago provides a vast landscape of opportunity for aspiring chefs, restaurateurs and other graduates of culinary colleges. In Chicago, home of the world’s first skyscraper and the two tallest buildings in North America, the sky really is the limit.

Culinary arts are just one facet of the cultural scene in Chicago, one of America’s most legendary and dynamic cities. The Windy City is renowned for its architectural treasures such as, Marina City, Merchandise Mart, and the Wrigley Building; and famous restaurants and expensive hotels—Four Seasons, Ritz Carlton, and The Renaissance Hotel.

Chicago’s restaurants and hotels are some of the stomping grounds for today’s rising chefs and hospitality professionals.

Did you know we have our own Culinary Museum?  The mission of the Chicago Culinary Museum and Chefs Hall of Fame is to promote and celebrate Chicago as a Culinary Mecca. Through hard work and dedication to this endeavor, the organization will take a leadership role with the entire industry to create a culinary environment that fosters education, awareness, and growth to our industry.   Theirgoal is to preserve the past and develop the future of the culinary achievements in the great City of Chicago and America. The Chicago Culinary Museum will be home to rare culinary artifacts and books, an interactive learning center for children, and will provide a common place for the hospitality industry. CLICK HERE for more information

For a taste of the city, make the rounds of the famous neighborhoods—Wrigley, Wicker Park, Chinatown, and Hyde Park, and dozens of others. Each offers up stellar selections of American and ethnic foods from inexpensive to upscale. Music and theater traditionally accompanied by restaurant outings, combine to make Chicago a rich smorgasbord of culinary cultural experience.

If you decide on a culinary program in Chicago you could be among students fresh out of high school or with working adults working toward a second career.

Navigating the city is convenient thanks to the Chicago Transit system. This network of trains (the “El”), busses, and taxis courses throughout the city.

The CHIC in Chicago is one of the most renowned culinary arts programs namely for its association with the Le Cordon Bleu Program in France. Here novice chefs learn the culinary ropes that lead them immediately to mid-level restaurant positions. You may choose from a number of Associates in Applied Science degrees, including general culinary arts and specialization in pastries and baking. Standalone culinary courses may supplement your current work as a chef or provide you with the necessary training to make a bigger career leap.

Kendall College offers programs for students interested in culinary arts as well as hospitality management. Expect these programs to teach you an interdisciplinary set of skills that combine both culinary skills as well as a critical set of business and modern communication and management skills. You can earn a Bachelors or Associates degrees in culinary arts and in pastry baking.

Art includes culinary learning and at the Illinois Institute of Art in Chicago you can learn what it takes to make a creative and innovative chef in a highly competitive field. Learn more about the Illinois Institute of Art’s professional, Associates, and Bachelors degrees in baking and pastry, cooking, general culinary arts (chef school), and in culinary and restaurant management. All the skills you need to break into a good restaurant job may be learned here.