Wanna see a list of the best 101 movies streaming on Netflix?  Paste has been publishing  guides to the best movies and TV shows on Netflix for three years now, and the selections keep improving. More than half of the movies in their 2014 edition are new from last year, and they pull from a variety of styles—romantic comedies, action flicks, indie dramas, blockbuster sci-fi, documentaries, animated films and more.  Here are some excerpts:

101.  FORREST GUMP – Few films infiltrate the collective American psyche quite the way Forrest Gump managed. You’ve undoubtedly heard someone make reference to this 1994 classic—whether it was a classmate sarcastically yelling “Run, Forrest, run!” as you hustled to catch the bus, or someone busting out their best drawl to deliver, “Momma always said life is like a box of chocolates.” The entire film is full of dialogue that’s both moving and funny (my personal favorites include “But Lt. Dan, you ain’t got no legs” and “I’m sorry I had a fight at your Black Panther party”). Forrest may be a simple man, but his story is our nation’s story, and we all are run through the emotional gauntlet as we watch him hang with Elvis and John Lennon, fight in Vietnam and encounter many a civic protest—all while in pursuit of his true love, Jenny. Tom Hanks delivers an Oscar-winning performance, and Gary Sinise is heartbreaking as Lt. Dan.—Bonnie Stiernberg 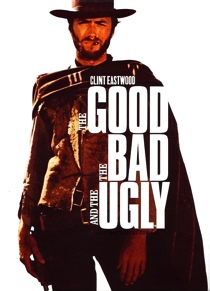 47.  THE GOOD BAD AND THE UGLY – Director Sergio Leone and star Clint Eastwood hit the ground running with their first collaboration A Fistful of Dollars, which took a Western interpretation of Akira Kurosawa’s samurai filmYojimbo. Following the adventures of Eastwood’s Man With No Name, the Dollars trilogy continued on through 1965’s For a Few Dollars More and, finally, to 1966’s The Good, The Bad and The Ugly. Only the latter two are available on Netflix Instant, but The Good, The Bad and the Ugly stands just fine alone as one of the best spaghetti Westerns of all time.—Mark Rozeman

28.  TRAINSPOTTING – Based on the gritty Irvine Welsh novel of the same name, this early film from the director of Slumdog Millionaire and Millions follows a thuggish group of heroin addicts in Scotland and features brilliant performances from young Ewan McGregor, Kelly Macdonald and Robert Carlyle. At times funny, gripping and nightmarishly haunting, Trainspottingis not an easy movie to forget.—Josh Jackson