The City of Chicago is offering free flu shots and everyone over the age of six months is urged to get one. 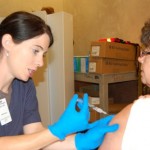 On the next two weeks, free shots will be offered at several Chicago city locations. Free shots are also available for the next several months at other locations throughout the city.  Vaccinate Illinois Week, Dec. 7-13, is a statewide initiative among multiple health agencies to educate the public about the importance of getting a flu vaccine, according to the health department.

The Chicago Department of Public Health plans to hold a series of flu clinics to mark Vaccinate Illinois Week and encourage residents to get immunized over the next week.

Starting Saturday, the city will host three flu clinics where residents can get flu shots at no cost, according to a statement from the health department. They will be held:

“It’s not too late to get a flu shot,” CDPH Chief Medical Officer Dr. Julie Morita said in the statement. “Flu season typically peaks in January and February. Get vaccinated now to protect yourself and others from illness.”

Public health officials recommend everyone over 6 months old get a flu shot and caution that pregnantwomen, young children, the elderly and people with underlying health conditions are particularly vulnerable to complications from the flu.