Click at bottom to get this FREE eBOOK of  Wilco’s December 2011 Incredible Shrinking Tour of Chicago, during which they played a succession of intimate venues as a “thank you” to hometown fans. The book features exclusive photos of the shows, backstage video footage and audio, documenting this unique week of shows of one of Americas foremost rock bands.  Earlier this month, Wilco embarked on their “Incredible Shrinking Tour of Chicago,” playing five hometown venues over five consecutive nights.  In honor of that,  dBpm Records has now released The Incredible Shrinking Tour of Chicago — a book for the iPad. It’s a collection of photos, show posters, and more, that documents Wilco’s December 2011 Chicago dates.
The Chicago-based alt-country rockers, fronted by Jeff Tweedy, have eight studio albums under their belt, plus a couple of collaboration albums with Billy Bragg and plenty of side projects to boot. Their 2002 album ‘Yankee Hotel Foxtrot’ put them on the front lines of the indie rock scene, although their three prior albums had already been getting plenty of attention.   With two Grammys earned for their 2004 album, ‘A Ghost Is Born’ — and Tweedy recently making his way onto prime time television — Wilco always seem to be doing something. Since Wilco are one of the most influential alt-country bands of our time, we know you know a lot about the band.

Wilco isn’t just a band, you see. It’s a symbol, maybe even a movement. “Slowly, improbably, unwillingly,” as Kelefa Sanneh recently put it in the New York Times, “Wilco has become one of those bands that stands for something.” What Wilco stands for is artistic backbone in the face of crass mercenary calculation, and 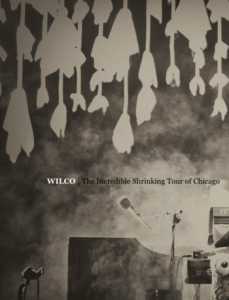 this has made them something of a beacon in the Age of Britney. The story of Wilco’s evolution—from competent pop-rock band to anticommercial rallying cry—goes like this: In 2001, Wilco produced an album its record label found far too eccentric to promote. Undeterred, Jeff Tweedy—the band’s founder, singer, and songwriter—began playing his new music live and streaming it over the Internet for free. In the process, he turned an orphaned album into a pop cause célèbre. Re-signed to a boutique label, Wilco went on to sell 400,000 copies of Yankee Hotel Foxtrot. So what’s not to love? Single-minded visionary produces genre-busting album. Home office drones demand a remix and a hooky single. Visionary refuses, only to triumph when his version of the album nearly goes gold. A great story, only it gets the essence of Wilco almost exactly wrong.

Wilco is an American alternative rock band based in Chicago, Illinois. The band was formed in 1994 by the remaining members of alternative country group Uncle Tupelo following singer Jay Farrar’s departure. Wilco’s lineup changed frequently during its first decade, with only singer Jeff Tweedy and bassist John Stirratt remaining from the original incarnation. Since early 2004, the lineup has been unchanged, consisting of Tweedy, Stirratt, guitarist Nels Cline, multi-instrumentalist Pat Sansone, keyboard player Mikael Jorgensen, and drummer Glenn Kotche. Wilco has released eight studio albums, a live double album, and four collaborations: three with Billy Bragg and one with The Minus 5.   Wilco’s music has been inspired by a wide variety of artists and styles, including Bill Fay, The Beatles and Television, and has in turn influenced music by a number of modern alternative rock acts. The band continued in the alternative country of Uncle Tupelo on its debut album A.M. (1995), but has since introduced more experimental aspects to their music, including elements of alternative rock and classic pop. Wilco’s musical style has evolved from a 1990s country rock sound to a current “eclectic indie rock collective that touches on many eras and genres.”[1]   Wilco garnered media attention for its fourth album, Yankee Hotel Foxtrot (2002), and the controversy surrounding it. After the recording sessions were complete, Reprise Records rejected the album and dismissed Wilco from the label. As part of a buy-out deal, Reprise gave Wilco the rights to the album for free. After streaming Foxtrot on its website, Wilco sold the album to Nonesuch Records in 2002. Both record labels are subsidiaries of Warner Music Group, leading one critic to say the album showed “how screwed up the music business is in the early twenty-first century.”[2] Yankee Hotel Foxtrot is Wilco’s most successful release to date, selling over 670,000 copies. Wilco won two Grammy Awards for their fifth studio album, 2004’s A Ghost Is Born, including Best Alternative Music Album. Wilco’s most recent studio album, The Whole Love, was released on September 27, 2011.