It comes as no surprise that Chicago is the deep-dish pizza capital of the world; thick, crunchy crust topped with lava-like cheese oozing from the seams, coupled with your choice of ingredients stuffed into a single pie. Is your mouth watering yet? Chicago’s signature approach to pizza is unapologetically excessive, with buttery crusts barely containing pools of tomato sauce and oozing ribbons of mozzarella. Whether you prefer sauce-drenched deep dish pizza or chunky pan pies with cheese-crusted edges, Thrillist has gathered our favorites from Chicago restaurants. When every corner pizza joint looks just as delectable as the next and you can’t seem to make up your mind, Thrillist has you covered. Take a bite out of their top 10 deep dish pizza spots in Chicago. 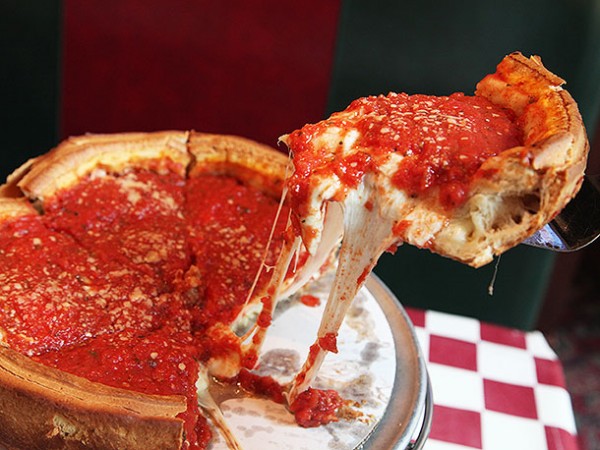 THE HISTORY OF DEEP DISH PIZZA

To appreciate the story of deep-dish, you must first look back to the Phoenicians, the Greeks and the Romans. Flatbread, the ancestor to the contemporary pizza, was first documented in a Latin text from 997 AD, in southern Italy near Lazio, with subsequent references noted throughout the Mediterranean, from Spain to Greece.    By the 16th Century, modern-day pizza (from the Italian wordpinsere, which means to pound or stamp – a reference to the flat dough) began to take shape in the Italian city of Naples. The thriving port was home to throngs of working class residents who lived in dense neighbourhoods around the Bay of Naples. Small rooms and cramped quarters meant most of their living was done outdoors, and people looked for food that was inexpensive and quick to eat. Baked in a hot oven and sold street-side, paper-thin pizza became the quintessential fare for the Neapolitan poor. Tomatoes brought back by traders from the New World topped the dough, along with an occasional smattering of anchovies, garlic or cheese.

Over the next decades, pizza grew in popularity, moving beyond Naples and spreading across both the country and social strata. In the 17th Century, Queen Maria Carolina d’Asburgo Lorena, wife of the then King of Naples, Ferdinando IV, famously erected a pizza oven in their summer palace. In 1889, Neapolitan pizza maker Raffaele Espisito created the infamous Pizza Margherita – a simple blend of tomatoes, mozzarella and basil – to honour the Queen of Italy, Margherita of Savoy, birthing one of the most classic pizzas to date.

Historian Tim Samuelson dug into the American origins of the distinctive dish, but found himself mired in conflicting stories, each as impenetrable as the pizza and peopled with characters every bit as robust. There is almost no documentation about who invented the dish, and without it, legend has taken over.    The only paper trail indicates the pizza almost certainly came out of a 19th Century mansion built with lumber money at 29 E. Ohio St. — the restaurant now known as Pizzeria Uno. But the question of who exactly developed the concept remains a mystery despite the best efforts of the City of Chicago’s official cultural historian.   “I wish that there were more written records — recipes or vintage photographs,” lamented Samuelson. “It’s an enigma, wrapped in a pie crust,” said Jeff Ruby, who co-authored “Everybody Loves Pizza” in 2005 with Penny Pollack. “Every day, it feels a little more lost to history.”   What is known is that in 1943, Chicago produced a unique variation on traditional Italian and American pizzas. It has a coarse, crunchy crust, sauce on top of cheese instead of the other way around, and Italian sausage at its heart.

Nationally, pizza is a $30 billion industry, but it is especially popular among Chicagoans. Pizzeria Uno does $3.2 million of business a year, and its sibling a block away, Pizzeria Due, does $3.4 million, even though neither delivers.    “What single food that hails from Chicago is as important as pizza?” said Marc Malnati, whose father, Lou, was a member of one of Chicago pizza’s first families. “This city was built around Chicago pizza.”   Experts with the city and in the restaurant industry studiously avoid taking sides in the debate over its origins, pointing out that history won’t make a pizza taste any better.      In any case, Samuelson says he now has enough documentation to prove the pizza emerged from a restaurant that opened in the early 1940s in the mansion on East Ohio at Wabash, originally built by Chicago lumber baron Nathan Mears.

The founders of that pizzeria are the stuff of Chicago legend: Richard Novaretti, known as Ric Riccardo, the colorful owner of Riccardo’s Restaurant at Rush and Hubbard Streets; and his friend, Ike Sewell, a Chicago liquor distributor with a native Texan’s gregariousness.   By the 1940s and 1950s, phone books and city registers show tenants of the mansion included Riccardo, Lou Malnati’s father, Rudy Malnati Sr. — and a restaurant offering a novel foreign dish called “pizza.”   Sewell had suggested to Riccardo that they open a Mexican restaurant, but a botched test meal made Riccardo violently ill. Riccardo’s counterproposal was pizza. It was Sewell who proposed super-sizing what was conceived as an appetizer-size offering, the businessmen would later say.

Their restaurant opened in 1943 as The Pizzeria, became Pizzeria Riccardo soon afterward, and settled in as Pizzeria Uno in 1955, when the partners opened Pizzeria Due in another Mears mansion at Wabash and Ontario.      When Uno’s opened, there were other pizzerias in Chicago, but this one served something different and distinctive: pizza thick as a sewer lid and almost as heavy.   Who developed the recipe remains unknown, despite efforts by Samuelson, other food experts and fans. It may have developed over time or been a collaboration. Certainly, Sewell popularized the image and promoted it heavily. Samuelson and others tend to credit Riccardo with the impetus for the idea and Sewell with making it famous.

But, of course, the story doesn’t end there. Samuelson interviewed Lou Malnati’s brother, Rudy Malnati Jr., who added a layer to the pie by suggesting that their father helped make Uno’s original recipe.     Adolpho “Rudy” Malnati Sr. was Riccardo’s former bartender and the Ohio Street restaurant’s most loyal employee. Advertisements and news clippings of the time say he became manager of Pizzeria Riccardo in 1951, but clips also variously call him the restaurant’s co-owner and main operator.     Malnati spoke Italian and broken English, and according to family tradition, he became a profit-sharing partner at the pizzeria on a handshake.         His son, Rudy Jr., offers two bits of proof for his claim that the elder Malnati should get partial credit for inventing Chicago’s pizza: a 1956 news clipping that calls his father the person who established Pizzeria Uno, and assurances that Malnati’s 82-year-old widow still helps make the dough at Pizano’s Pizza, which Malnati Jr. opened in 1991.

But if Rudy Malnati Sr. had a hand in the pizza dough recipe, he never said so in interviews, and Samuelson couldn’t find any documentation to back it up.      Over the years, various employees of Uno and Due went on to found some of Chicago’s most famous pizza houses: Uno’s cook Alice Mae Redmond at Gino’s East, Uno’s waitress Helen Delisi at Delisi’s Pizza, Due’s employee Louisa DeGenero at Louisa’s Pizza.   In 1955, a young bartender at Uno, Luciano “Lou” Malnati, was sent to manage the new Pizzeria Due. He later opened his own restaurant in Lincolnwood, and his sons Marc and Rick now manage a chain of Lou Malnati’s restaurants.   His work done, Samuelson said he thinks Pizzerias Uno and Due deserve landmark status. “There’s also a fundamental truth behind my long-standing interest in this subject.”     What’s that?   “I really like the pizza,” he said.