Are you looking for some tips for the 2018 Air & Water Show?  We know how much fun it is but we also know it can be a hassle so here are some great tips to help you enjoy the days better.  Please remember, there will be 1.3 million people converging on Chicago lakefront to see this spectacular 2018 event so plan accordingly.

Getting to the Show

Public transportation is the best way to get to the show. While the trains are usually crowded, Helmer said it beats braving the crowded expressways into the city. Information for all the routes can be found at www.transitchicago.com and www.metrarail.com.    Chicago officials say there’ll be extended bus and train service operating on this weekend because of the city’s annual Air & Water show.
The show is Saturday and Sunday. In a news release, the Chicago Transit Authority officials say they will be longer trains operating both days on the blue, brown, orange and green lines. Officials say those riding the brown line should allow extra travel time because of a weekend track closure.    There’ll also be additional bus service on two routes.    The agency also encourages spectators to buy ride passes ahead of time to avoid long lines.

To help you combat the parking crowds, below are some helpful tips: 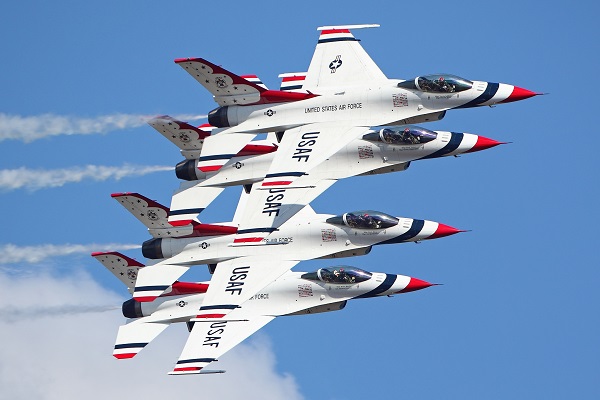 Be the early bird

No friends in high places? Head for North Avenue Beach early, Helmer said. Arrive between 8 a.m. and 9 a.m. to beat the crowds. Other beaches with a view of the action are Ohio Street Beach, Montrose Harbor Beach and the lakefront from Oak Street Beach to Fullerton.

If you must drive

Leave as early as 6 a.m. Mary May, of the Chicago Department of Cultural Affairs and Special Events, suggests parking at the Millennium Park Parking Garage with a free shuttle to viewing areas. No parking is available at show central. Millennium Garages’s four, underground locations offer discounted online parking packages for purchase in advance and a free shuttle to and from North Avenue Beach. You might find parking at Stockton Drive, just south of Lincoln Park Zoo, or at Piper’s Alley on the corner of North Avenue and LaSalle Street. The presale cost for the two lots near Lincoln Park is $50. There’s a small parking garage at Wells Street and North Avenue, and street parking could be available though there’s a two-hour limit. Don’t forget to pay the meter, usually located mid-block, and put the receipt inside the passenger’s-side window.

Viewing the Air and Water Show

North Avenue Beach is the epicenter of all the action, but other nearby locations will still give you a good view says the Chicago Tribune. 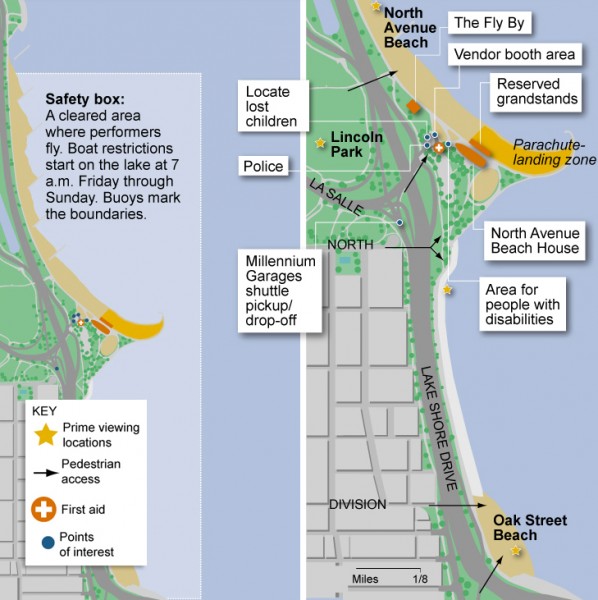 The Thunderbirds continue to represent all Airmen across the globe. The Team is made up of over 120 personnel.  For more information on the U.S. Air Force Thunderbirds, visit afthunderbirds.com

Jumping out of an aircraft 12,500 feet above the earth’s surface, racing to North Avenue Beach at speeds exceeding 120 mph and landing with smiles, ready to do it all again; all in a days work for the Golden Knights. For more than 50 years, the U.S. Army Parachute team has amazed and thrilled audiences with their precision parachute demonstrations in more than 14,000 shows in all 50 states and 48 countries.

A typical Leap Frogs performance consists of fourteen jumpers leaping out of an aircraft at an altitude of 12,500 feet. During free fall, jumpers reach speeds of 120 mph and can accelerate up to 180 mph by pulling their arms to their sides and straightening their legs into what is called a “track.”

The jumpers typically open their parachutes at around 5,000 feet by releasing a smaller pilot chute which deploys their main blue-and-gold canopy. After deploying their chutes, the Leap Frogs fly their canopies together to build dramatic canopy-relative work formations.

The F-35 is descended from the X-35, which was the winning design of the Joint Strike Fighter (JSF) program. The F-35 took its first flight on December 15, 2006. The F-35 variants are intended to provide the bulk of the manned tactical airpower of the U.S. Air Force, Navy and the Marine Corps over the coming decades.

For more information on the F-35 Heritage Flight, visit www.acc.af.mil

The General Dynamics (now Lockheed Martin) F-16 Fighting Falcon is a single-engine multirole fighter aircraft originally developed by General Dynamics for the United States Air Force (USAF). Designed as an air superiority day fighter, it evolved into a successful all-weather multirole aircraft. Over 4,500 aircraft have been built since production was approved in 1976.

A twin-engine supersonic, all-weather carrier-capable multirole combat jet, designed as both a fighter and attack aircraft.

The workhorse of the Air Force combat airlift fleet, the C-130 Hercules has been in service for more than half a century. Designed specifically to transport troops and equipment in the combat zone via airdrop or short runways, the Hercules operates throughout the U.S. Air Force serving with Air Mobility Command, Air Force Special Operations Command, Air Combat Command, U.S. Air Forces in Europe, Pacific Air Forces, Air National Guard and the Air Force Reserve Command, fulfilling a wide range of operational missions in both peace and war situations.

The North American Aviation P-51 Mustang is an American long-range, single-seat fighter and fighter-bomber used during World War II, the Korean War and other conflicts. The Mustang was designed in 1940 by North American Aviation (NAA) in response to a requirement of the British Purchasing Commission for license-built Curtiss P-40 fighters. The prototype NA-73X airframe was rolled out on 9 September 1940, 102 days after the contract was signed and first flew on 26 October.

This aircraft is instrumental in providing the capability necessary for the Coast Guard to fulfill its maritime patrol, drug and migrant interdiction, disaster response, and search and rescue missions more effectively.

The AeroShell Team has been performing for over twenty years, amassing thousands of hours in front of airshow fans all over North America.

The Aerostars are a precision aerobatic demo team whose aerial ballet captivates aor show audiences large and small. They fascinate the crowd with a combination of graceful aerobatics flown in tight formation, spectacular breakaways followed by breath-taking opposing passes and awe-inspiring inverted maneuvers. The team performs in the Yak 52 TW, a former Soviet designed, Romanian built, WWII-type aerobatic trainer. The deep roar of their 400 horsepower, supercharged, nine cylinder radial engines singing in harmony is a true crowd-pleaser. The Aerostar’s performance is the embodiment of teamwork, professionalism and commitment to excellence.

Parking for the Air and Water Show

Once you’ve decided where you going to watch the Air and Water Show, you’ll want to plan how you’re going to get there and where you’ll park your car. We’ve compiled a list of parking garage locations that are all either close to the places you’ll be watching the skies from, or close to public transit that’ll help you get to those viewing locations.